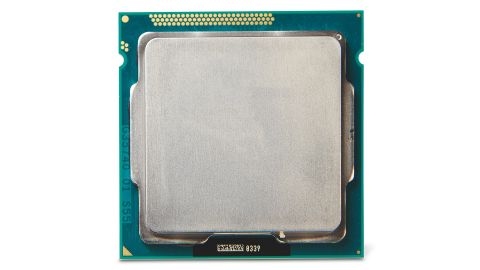 The fastest of the new breed

A quick chip, but Ivy Bridge is proof that Intel is no longer terribly interested in the desktop PC

It's new CPU season at Intel with the launch of the Ivy Bridge family of CPUs and the new Intel Core i7-3770K. It's the quickest of the new breed and therefore likely to be the fastest CPU in the real world.

That's because Intel's exotic six-core processors, like the Intel Core i7 3960X, are really only of interest to a small niche of money-no-object lunatics. They're just not good value.

At the same time, the disappointing performance of the new AMD FX 8150 means AMD doesn't really have anything to keep the Intel Core i7 3770K honest.

Instead, success and failure for the Core i7 3770K will hinge on its ability to convincingly swat aside the chip it replaces, ye olde Intel Core i7 2700K. At first glance, that might not be a trivial job.

For starters, the new Intel Core i7 3770K still has four cores. And it's not clocked any higher than the 2700K. Nor does it have any additional cache memory.

All of which is rather odd when you consider it sports Intel's spangley new 22nm process and thus 3D Tri-gate transistors.

You might think the shrink from 32nm to 22nm would allow for a couple more cores, or some clockspeed.

What you do get is the latest upgrade for Intel's HD Graphics.

Now known as HD Graphics 4000, it gets an extra four execution units for a grand total of 16 along with Direct X 11 support.

The QuickSync transcode engine gets a bit of a buff, too. It's welcome enough, but it's what we were hoping for.

Then again, maybe the minor revisions Intel has applied to the four cores will release some extra performance. Likewise, even if Intel doesn't fancy ramping up the clockspeeds, there's nothing stopping us from clocking the twangers off those 22nm transistors.

Before that, let's have a closer look at what makes the Intel Core i7 3770K tick. As it happens, it very much is a Tick rather than a Tock in Intel's Tick-Tock chip development regime.

That means it's a die shrink rather than an all-new architecture. In other words, it's the opposite of the existing Sandy Bridge chips such as the Core i7 2700K.

The new Intel Core i7 3770K, at least in terms of the CPU side of things, is largely the same design, but based on 22nm technology.

If we're honest, we're pretty bummed out that the use of 22nm technology hasn't allowed for more cores or a higher clockspeed.

After all, Intel's first desktop quad-core processor appeared six years ago. And here we are in 2012, stuck on four cores for mainstream PCs.

So much for Intel's promises of a massively multi-core future.

That said, there's grounds for hoping the Intel Core i7 3770K could be a bit of an overclocking beast.

For starts, you'd have thought lower power leakage from the 22nm 3D Tri-gate transistors would help this chip hit higher clocks than ever before.

What's more, this is a K Series chip, so the multiplier is unlocked and now goes as high as 63. in theory, that allows for clockspeeds up to 6.3GHz.

Intel has also added support for dynamic frequency adjustment from the Windows desktop. That's handy, both for making overclocking easier and for allowing you to set clockspeeds based on application type.

As for the graphics side, even with a third more execution units and a few other tweaks, real gamers will still want to plug in a proper graphics card.

In truth, the new HD Graphics 4000 core is more of interest for laptop PCs that rely on integrated graphics.

On the desktop we'd beg you to buy an add-in board.