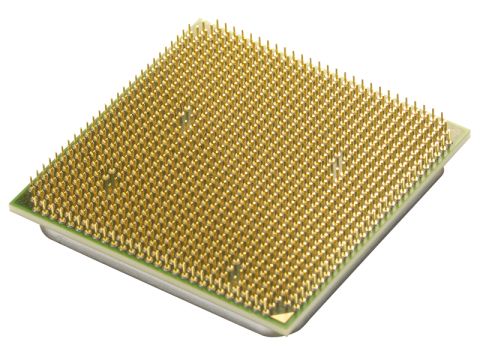 The Phenom X4 9850 is natively quad-core, not a dual-die sandwich

We'd all feel a little better about AMD's current chips if it wasn't for the name.

You call your processor 'Phenom' and, frankly, people expect a phenomenon. When it isn't one, the sting is all the harsher. It's like finding out a guy called Steve Massive is only five foot six.

AMD's latest consumer top-end chip is no phenomenon, but it does see the green party find its feet a little again. Superficially, little has changed since we made disparaging sniffing noises at the 9700 back in January.

The 9850 is another quad-core, 65nm chip, and still a revision of the old K8 design that the aged Athlon 64 used. We'd be fools to expect greatness, especially as the world was due the Phenom 9800 and 9900s back in November, but AMD just couldn't pull it off, plumping instead for the lower-clocked 9500 and 9600.

Still, here's a 2.5GHz model at last, with that confusing '50' suffix denoting Phenom's new B3 stepping, which tidies up a few erratums in the earlier models. Most notably, say goodbye to the TLB erratum 298 in Phenom's L3 cache, which carried a minor risk of system hang-ups, but when fixed with a BIOS update meant a small performance hit.

Being all too aware of what the 9700 (itself now replaced by the 9750) is capable of, it wasn't much of a surprise to find the 9850 mostly snapping at the heels of Intel's venerable but beloved Core 2 Q6600.

Unlike Intel's low-end four-player, this is natively quad-core, not a dual-die sandwich, plus it's got an extra 100MHz on the clock, though that doesn't count for much in practice. The Q6600 draws slightly ahead in most tests, and significantly in Crysis, but the 9850 can scarcely be called a disastrous performer.

Additionally, it'll overclock on air (with a spot of volt-tweaking) to 3GHz, but realistically bank on a bump of 200-300MHz.

A rival to Intel?

As online stores offer both this and the Q6600 for as low as £150, the 9850 is the fruitiest drop-in upgrade yet, if you're already toting an AM2 platform. If, however, you're building a new system, AMD simply has nothing to compete with the higher-end Core 2s.

The 45nm, socket AM3 chips (which will work in AM2 boards) due later may close the gap, but after many Phenom let-downs, it's hard to bank on that.

So, hardly a silicon superstar and AMD remains conspicuously absent from fashionable high-end parties, but smart pricing makes this the most desirable Phenom to date.