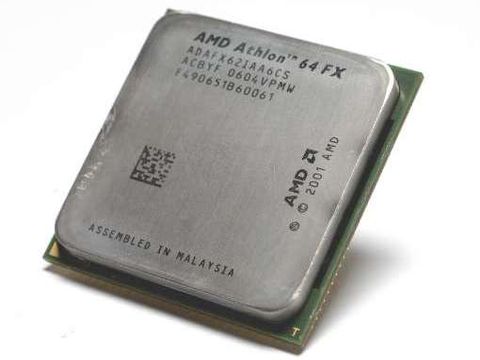 The FX range's time as the fastest processor could be up

The FX range retains its performance crown, for now...

While it has the chance, AMD is going to milk its performance leading cash cow. Intel has been floundering trying to fix its roadmaps and change tack moving from Netburst architecture to Core technology. Meanwhile AMD has had a free reign on the desktop to hit Intel where it hurts: in its performance crown jewels. All of that is about to change: the FX62 seems to be the last triumphant gasp for AMD's 90nm technology that's done it proud.

At a basic level the FX62 is a simple bump in clock speed, upping this to 2.8GHz. It's dual-core, it still has the twin 1MB L2 cache, and each core has the same L1 cache. The real excitement is with the introduction of the integrated DDR2 memory controller and the new AM2 socket. While no one likes a socket change, AMD has opted to move the new DDR2 processors from 939 to 940 pins, though it's certainly not pin compatible with previous 940 processors (Opterons).

AMD manages to keep its claim of producing the fastest desktop processor. The FX62 came close to being the first system to top the 300 SYSmark2004 scoring 297. Media performance scaled equally well with the Windows Media Encoder test passing in two minutes and for 1080p playback the average CPU usages was 19 per cent with a peak of 40 per cent.

No surprises so far but some of the results tell a less exciting story. The running temperature is very hot at 86C, making this 125W CPU one of the hottest processors we've seen, and shows that to go further AMD has to move to its new 65nm process. A good explanation as to why the next FX chip isn't due out until next year (2007).

At best the DDR2 memory offers a six per cent increase in speed, but the gain is there to be had for anyone wanting to sink a grand into the hardware and it all goes to prove AMD was right to hold off on DDR2.

While some question the advantage of an on processor memory-controller the major benefit is that, despite an entire socket change, the existing motherboard chipsets are compatible with AM2 thanks to the HyperTransport bus. This provides mature, stable chipsets, and throughout testing the system was utterly stable.

AM2 isn't just about DDR2. Processors, including the FX62 that supports AM2 will come with additional new features: the first is AMD's Pacifica Virtalization. It's not compatible with Intel's equivalent, but is a technology that will become increasingly important at the sever level so AMD has to strike its claim on this segment. There will also be new power envelopes but the FX62 certainly isn't included in that.

Along with the new socket comes a new retention mechanism. It has the same dimensions as the old one, but uses four screws to attach itself and only has a single lug at either end for attaching the cooler. Our standard 939 cooler attached perfectly well, but it's possible not all will fit. While any that screwed themselves into place via the mounting holes will defiantly not work.

The FX range retains its performance crown but with Conroe around the corner, and looking ridiculously fast too, we'd guess it's just a caretaking position. Neil Mohr