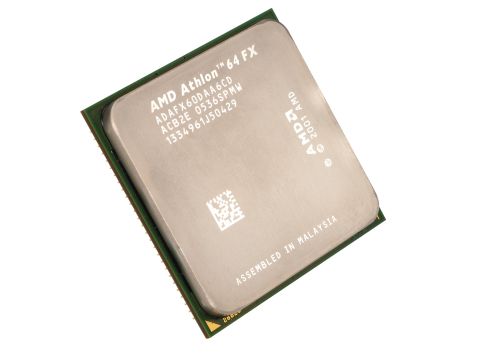 Once the choice of gamer, AMD has slipped behind Intel

Processors keep getting faster and faster, it's one of the huge computing clichés. The latest chip from AMD doesn't deviate from this trend, although it's still something of a surprise. AMD's FX range was originally aimed at the 'enthusiast' market, alternatively known as the gamers-with-lots-of-spare-cash segment. Similar in scope to Intel's Extreme Edition chips, AMD has, until now, stuck with single-core FX chips, because most games aren't programmed with dual-core chips in mind.

There's obviously been a change of ethos for the FX-60, however, as the move to even numbers finally introduces the first dual-core FX chip. This change in scope means that comparisons to previous members of the FX range are difficult, because this is closer to a speed boost for the Athlon 64 X2 4800 than any single-core offering.

When it comes to tangible performance improvements, it depends on which chip the FX-60 is compared to. Relative to the last release from this range (the FX-57), the raw power on offer is phenomenal and almost doubles the Dhrystone results from SiSoftware Sandra 2005, from 12,034MIPS to 22,000MIPS, with a similar story in the floating point tests.

This is repeated in the benchmark's multimedia test, managing a whopping 49,227it/s as opposed to 26,807. However, things are less impressive when compared to the Athlon 64 X2 4800 , which scores 20,603MIPS and 45,944it/s respectively and is a relatively minor improvement. Performance increases aside, this isn't a chip worth rushing out and upgrading your whole platform to.

The imminent release of the M2 spin-off, the Athlon 64 that supports DDR2 memory, limits the upgrade path for the socket 939 format, because DDR2 requires a new socket. Even if you already have a socket 939 motherboard, the performance you're getting for the price makes the likes of the Athlon 64 X2 4200 a much more interesting dual-core chip. Of course, if you do want the best performance and money really is no object, then this is a phenomenal slither of silicon. Alan Dexter