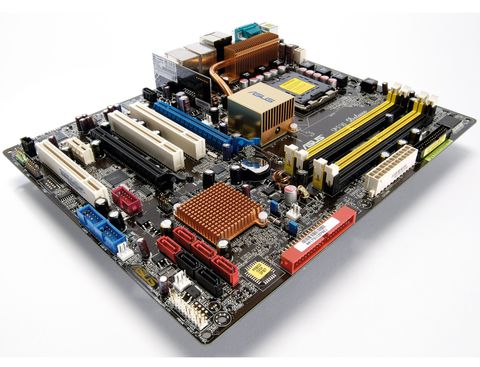 The Asus P5B Deluxe is the first motherboard based on the 965 chipset to come through our labs. So far, the choice of boards that make full use of Intel's newly crowned performance champion has been slim. Does this chipset do justice to the Core 2 Duo, or is the untried technology best left on the shelf?

The 965 chipset supports up to 8GB of dual-channel DDR2 memory, PCI Express x16 and a 1,066MHz FSB. The P5B Deluxe board offers a maximum of six USB 2.0 sockets, six internal SATA ports - giving the option of Raid 0, 1, 5 or 10 - and an external SATA port. The chipset has relegated legacy IDE to a single connector - a problem if you are still using a PATA hard drive in your current system.

As a premium board, the P5B comes with an array of integrated features. Wi-Fi is included as standard, along with dual Gigabit Ethernet and an array microphone. Asus has created a silent solution by installing a copper heat-pipe to direct heat away from the north bridge, but neglected to do the same for the south bridge, which can become hot during use. It would have been better if Asus had followed previous designs and extended the heat-pipe to the south bridge as well.

The P5B Deluxe has a wealth of standard options in the BIOS, but serious overclockers will be frustrated by the lack of user-configurable settings related to voltage and frequency. What Asus provides us with instead are three settings for intelligent overclocking, catering for resource-hungry applications, reduced noise and power consumption, or normal use.

The good news is that the board's performance with a 2.66GHz processor is nothing short of amazing: it achieves a SYSmark 2004 score of 354, the second-highest we have ever seen. 3DMark06, video encoding and memory tests all trounce the previous best Athlon FX 62 scores as well.

The question for those who are considering this motherboard is whether or not it's worth waiting for the potentially more powerful Nvidia Nforce5 chipset. The Asus P5B Deluxe has the advantage that it's already available for purchase, and it delivers great performance. Anyone opting to become an early adopter of a mid-range Core 2 Duo system will not be disappointed. Orestis Bastounis