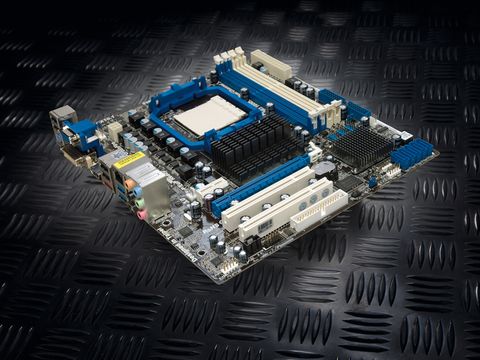 Something old, something new, something borrowed and something blue: That'll be the 880GMH's single USB 3.0 port

Fact: When it comes to CPUs, AMD makes cheapo chips. Would it prefer to sock it to Intel at the more profitable end of the market? You're damn tootin', it would. But until its all-new Bulldozer processor rocks up next year, AMD is stuck peddling a geriatric CPU architecture that dates back to 2003.

In our minds, then, PCs based on AMD technology are all about maximum performance in return for the minimum outlay. That means paying as little as possible for a motherboard.

By that rationale, Asrock's 880GMH USB3 should be our default winner. It's the cheapest board on test. The only slight snag is that it's not the cheapest by all that much. MSI's impressive 880GMA-E45 is based on the same 880G northbridge chip and is yours for just £17 more while the graphicsless MSI 870A-G54 is even closer in the price lists.

At the very least, Asrock's effort needs to be nearly as good as those boards. For starters, you get the AMD 880G northbridge chip complete with AMD's latest DX10.1 graphics, 128MB of Sideport graphics memory and all the Blu-ray accelerating 2D goodness you can eat.

The downside is that the usual SB850 southbridge chip has been replaced with the low-end SB710 from the older 7 Series. The most obvious impact of this is the loss of SATA 6Gbps support. There are five SATA ports and they're all 3Gbps.

As odd as that is, things get even weirder with the USB 3.0 feature. Instead of using the popular NEC controller chip, Asrock has gone with the Fresco Logic FL1000G. The result is a single USB 3.0 port instead of the usual pair.

Whether or not you find that acceptable, the following factoid is sure to infuriate you. On the back panel, there are two blue-coloured USB ports. But only the one closest to the PCB is USB 3.0. Given Asrock's reputation for odd-ball boards, none of the above is all that surprising.

Moreover, what matters is performance. Aside from the inevitable limitations of the SATA 3Gbps ports, the news is generally very good. Application performance is strong if fractionally slower than the best.

As for overclocking, a maximum bus speed of 315MHz makes for ample overclocking. It's easy to achieve, too, thanks to a healthy set of options in the BIOS. You also get the same Turbo UCC feature that appears on Asrock's more expensive 890FX Deluxe 3. As an auto-overclocking tool, it's not much cop. But you wouldn't want to be without its ability to unlock hidden cores.