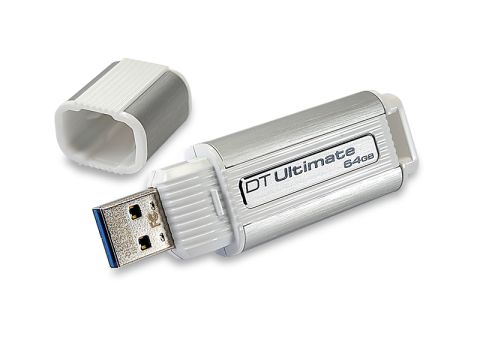 With double the speed of USB 2.0, this USB 3.0 data stick offers speedy file transfers between machines

Early adopters are usually the ones who get punished. It's one of the laws of the tech jungle. Jump the train too early and you'll get shafted, both in terms of pricing and reliable performance. That's probably why it's taken so long to get USB 3.0 data sticks from the usual reputable folk.

To be honest that's not such a bad thing, as it's only recently that every new motherboard, from the top to the bottom, is coming out with USB 3.0 ports on them.

One of the surprising things is that this DataTraveler doesn't have the sort of price premium I would expect from a new tech stick, especially considering the performance increase USB 3.0 delivers.

At £138 it costs only a little more than the £100-odd that traditional USB 2.0 64GB sticks cost, and you're getting way more than twice the performance. The key performance metrics will always be the read/write numbers, and you could colour us very surprised to see the DataTraveler Ultimate outperforming even its stated numbers on the packaging.

Kingston is touting read/write figures of 80MB/s and 60MB/s respectively. Plugged into a Gigabyte board running off an NEC USB controller we found max numbers of 97MB/s and 73MB/s. Compare that with the USB 2.0 performance of 35MB/s and 29MB/s for the same stick's read/write speeds and the boost is obvious.

In our real-world file transfer test it was also twice as fast as USB 2.0 modes, taking 21 seconds in USB 3.0 against the old school interface's 44 seconds. So it's quick, and only a little more expensive than the older tech.

You may not be an early adopter here, but it'll be a more than satisfying purchase.