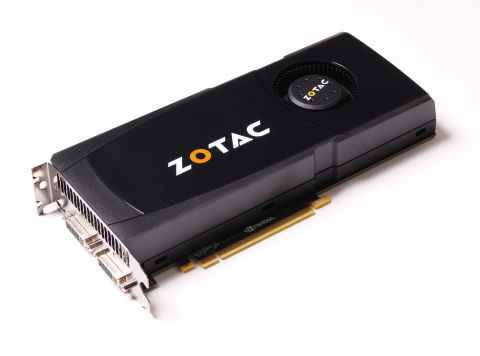 So the GTX 470 represents a clear win for Nvidia then in a place where it absolutely had to have one. In performance terms alone this means the green company's holding the second and third position behind AMD's awesome, but awesomely expensive, HD 5970.

But things are only set to become even stickier in the coming months as the full Fermi lineup begins to roll out and AMD starts the refresh wagon a-rolling.

With the vast majority of games available right now though around £200 is the most reasonable people ought to be spending on a new graphics card. That then brings the HD 5850 to the fore, though there are rumours Nvidia is looking to bring a GTX 460 to the table in June which could take care of that duel.

Despite the sticker that appears in every retail box, proclaiming the possible finger-burning heat of the card, the GTX 470 is a far cooler card than it's bigger, beefier brother, the GTX 480.

During full load the GPU hovers around the 60 degrees Centigrade mark, where the GTX 480 was sometimes hitting over 90 degrees Celsius.

The fact that there is so much clear water between the equivalently-priced HD 5870 and this Zotac card is especially pleasing. Nvidia has done well pitching this card directly against AMD's top single-GPU card.

The noise the stock cooler makes under full load can be a mite distracting - it's almost like going to back to the bad ol' days of ATI's turbine-like fans on the X1900 XTX. We're definitely looking forward to seeing the different manufacturers releasing their own cooling designs if Nvidia ever release the designs later on.

We also think, like with the HD 5870, that £300 is too much for the normal user to be asked to pay for a card that isn't the top of the line. A price sitting closer to the £200 or even £250 mark would have seen the GTX 470 being heralded as the best card in the world. Instead it's only a very good card.

AMD have definitely lost this battle as it stands with the GTX 470 comfortably out-performing the HD 5870.

That though is only as it stands right now, as we write the overclocked HD 58xx series is on the test benches going through their paces, and we'd hope that would mean a drop in price of the vanilla HD 5870s. The 2GB overclocked versions of the HD 5870 is claimed to be getting much closer to the performance of Nvidia's Fermi cards, and that could spell trouble once more for the green company.

You'd also think AMD would follow its previous form with us seeing a redesigned card with the HD 5890 moniker tipping up in the Summer or Autumn.

That said, with Nvidia's latest still desperately short on stock AMD might well be reticent to drop its prices until there's actually physical cards out in the wild to really test it's own GPUs.

Still, the GTX 470 is a very good card, and does exactly what Nvidia needed it to do. If you can find one then right now it is the £300 card to buy.