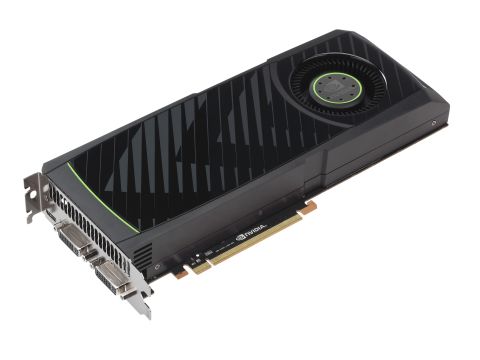 Nvidia's GeForce GTX 580 is the fastest Fermi card to date

Coming almost out of nowhere is Nvidia's latest, greatest graphics card to date: the GeForce GTX 580.

This new card has been extrapolated from the age-old adage, 'If it ain't broke, don't fix it.'

Nvidia's inaugural DirectX 11 card, the GeForce GTX 480, was a little broken, so Nvidia has been beavering away for most of this year trying to fix it.

In terms of performance, though, the GTX 480 was a very good card. In single-GPU metrics, it was the fastest card available, despite AMD's launch of its second-generation DX11 cards: the Radeon HD 6870 and HD 6850.

That was until this new chip turned up anyway.

In fact, the broken part of the GTX 480 came from what Nvidia promised for the first Fermi GPU. Originally, the GF 100 was touted as having a full compliment of 512 CUDA cores. But when the GTX 480 hit our test benches, the GF 100 GPU inside it was sporting a cut down 480 cores.

Rumours abounded that this was all down to poor chip yields from silicon wafers with the full core count. Cutting that count to 480 then increased the numbers of usable chips in each wafer and made for a far more viable card.

Nvidia is still denying that there were any yield problems with the GTX 480. However, as Nvidia's Technical Marketing Director, Tom Petersen, told us at the GTX 480 launch, it wasn't "the perfect chip".

The GF 110 housed in the GTX 580 could well be that perfect Fermi chip, though. It has the full 512 core count and the same Streaming Microprocessor configuration as the GTX 480.

But we weren't expecting the next generation of Fermi cards to be coming quite so soon. Nvidia has kept this one quiet for a long time and it wasn't until last week that we actually found out what it was up to.

So spoiling the launch of AMD's latest cards, as well as getting the jump on its high-end Caymen-powered cards, is something that Nvidia will be feeling rather proud of.

With this launch, the GTX 580 is retiring the GTX 480 and slotting into exactly the same place and price point as its outgoing sibling.

There's been no strange reordering of Nvidia's card nomenclature to match what we've seen from its competitors.

Since AMD have replaced the HD 5870 with a slower card – in the shape of the increasingly clunky-looking HD 6870 – Nvidia was at pains to point out that this is a "100 per cent replacement for the GTX 480". Tom Petersen suggests stock of the GTX 480 will rapidly disappear and demand will be replaced by this new card.

What's more, this new graphics behemoth is also heralding the approach of the 500 series of second-generation Fermi cards, with the lesser-lights of the card family filtering through fairly soon after.

So is this new card a worthy successor to what was already the fastest single-GPU graphics card out there? Or is it just a hefty, hot, atavistic GPU from the green side of the graphics divide?