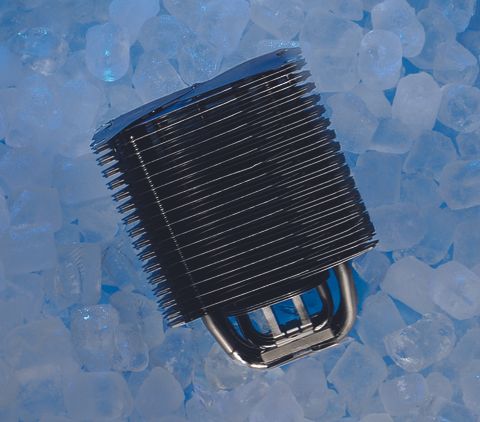 Why, yes, we are waiting for the hammer to fall

The Hammer is a wonderfully gothic-looking creation, with a very fetching gloss black nickel-plated finish complete with an usual design of interlacing fins.

Thor's Hammer tops other big towers such as Titan's Fenrir by carrying a lot of pipe-work, with four main 8mm heat pipes with Direct Touch, where they're in direct contact with the top of the processor, and another three inner 6mm pipes.

It's something of a monster, too, at over 160mm tall. It won't suit crowded boards, and if your RAM has heat spreaders on top you could be in for a disappointment.

Fitting proved to be a right pain as the sprung bolts can't be turned by hand readily and are rather inaccessible for the tiny supplied spanner. Once on, you'll be reluctant to ever remove it.

For AMD chips, it employs the more common lever arm, which looks a little flimsy for something of this size. It doesn't come with a fan either, just the rubber fittings for two.

Performance was excellent at idle. At just 41 degrees on our test system, this is as good as it got with any of our test subjects.

At full load, it reached 56 degrees, not quite as good as we'd hoped for such a giant – more airflow required we think. It has something of a reputation among overclockers as having potential, and all those pipes probably see to that.

Thor's Hammer isn't particularly cheap, and if you aren't going to have your PC's interior on show then the fancy finish is a waste of time. If you are the sort that runs your system board out, then it's got to be a contender, but there are better coolers available for less.