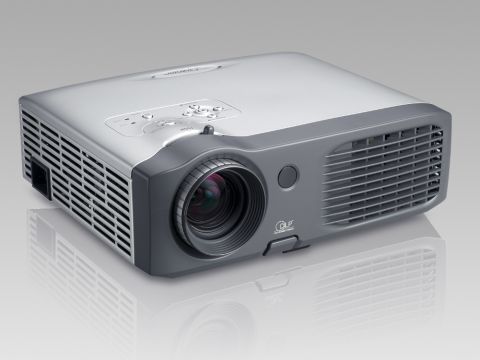 It may lack some of the flair of rival models, but in terms of features for the price, the EP770 is hard to argue with

Optoma is an increasingly popular brand, both with business and schools, as it offers a wide range of affordable DLP (Digital Light Projection) machines.

The Optoma EP770 (£915 inc. VAT) is a redesigned replacement for the older EP739 and is aimed at meeting rooms and classrooms looking for a bright, semi-portable but affordable projector.

It isn't the smallest machine around, weighing in at 2.4kg. However, it's light enough to be taken on the road with you should the need arise. Optoma even supplies the unit in a carry case, which is large enough to carry the accompanying leads too.

The body of the projector has a new design and, while it looks sleek, is of a uniform two-tone grey look. The lens area is large which makes the unit easier to focus, and the addition of a zoom controller on the top adds to the usability.

The big selling point of this model is the 3000 ANSI lumens lamp, which makes it one of the brightest projectors in its price class. When it comes to presentations, it means you can use it in any room, regardless of lighting conditions.

Interestingly, while the fans need to run all the time to maintain a cool unit, the EP770 proved remarkably quiet. This is due to a new design feature, which means you can use it in smaller meeting rooms without it being intrusive.

Optoma has improved the colour wheel, which now comes with five colours, rather than the customary four. So images look far more realistic, especially when running in movie mode. This is primarily a work tool, and the array of ports on the back of the unit allow you to connect to any device, as it comes with DVI, VGA-in and -out, S-video and video.

There are certainly cheaper, budget-priced projectors on the market. But none of them comes with the range of built-in features the Optoma EP770 has.