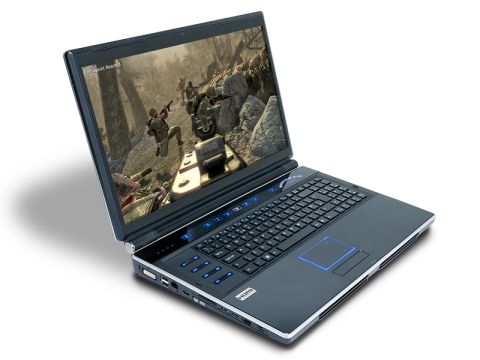 This is trying to stretch the term 'laptop' a little too far. Attach legs to the Cryo Libri Iceni and it could happily be described as a small coffee table. It weighs more than most efforts from IKEA too.

None of this should be surprising as it's so densely-packed with high-end PC technology we're surprised it hasn't started to collapse in on itself to form a computational singularity capable of instantly working out the answer to life, the universe and everything.

There's a magnificent selection of hardware inside: so much so we feel like kids in a sweet shop, not knowing quite where to start. It's probably safest keeping those sticky fingers on the outside and taking a look at the vast chassis.

The Cryo also boasts illuminated touch controls, which you'll either love or find a bit gourdy but they can be turned off.

Under the machine you can see three 40mm cooling fans. While this might initially fill you with dread as you reach for the ear protectors, in our mind more fans makes for less noise, as they can all spin more slowly. But beside this the obvious fans, the stiff screen hinge, the gourdy controls all smacks of a level of design unsubtly; this really isn't a MacBook Air.

The screen is well sized at 18.4 inches and it has our preferred 1,920 x 1,080 resolution, presenting a suitably high pixel per inch ratio. It does have the usual laptop limitations of a poor vertical viewing angle, but the response rate for gaming is good.

There are good reasons for this bulk beyond that screen. The most obvious is the pair of Nvidia GeForce GTX 285M graphics processors in SLI that sit inside, waiting to pump frame upon frame onto that 1080p screen. The first question that should spring to mind is: why the DirectX 10 hardware?

For us this is a major turn-off for what otherwise should be a do-it-all system. Happily Cryo offers a CrossFire Radeon HD 5870 Mobility option for an additional £56.

In performance terms these two SLI and CrossFire option closely exchange benchmarks but only the AMD option provides DirectX 11 goodness.

Technicalities aside, the performance for what still passes as a laptop is astounding. The alternative Nvidia option would be to offer a SLI GTX 480M, but as we are yet to see such a model the SLI GTX 285M is currently the fastest mobile Nvidia option.

As we suspected, the noise levels remained pleasingly low even under gaming loads, while the base also remained lap-level cool – though seriously, are you going to put this on your lap?

It's worth scouring the benchmarks below just to see how impressive the scores are, all the time reminding yourself that this is a laptop that's rattling out those frames per second. We've said it before, but this is certainly no MacBook Air – you can play games on this beast.

Any green/red fan-boy should know that there's little point popping a high-end dual-card graphics solution into a system without the processor power to back this up, otherwise the system will simply end up being CPU limited. So obviously Cryo has used – cue echo effect – the most powerful mobile Intel processor in the world – end echo effect.

If that leaves you quizzical, it's the undisputed king of the road: the Intel Core i7 940XM Extreme. It's less the impressive 2.13GHz that it runs at and more the phenomenal Nehalem architecture built on the Clarksfield 45nm process that makes this a bitstomping colossus. With its four cores, eight threads via HyperThreading and Turbo mode going up to 3.33GHz, no matter if you're throwing the latest multi-threaded tasks or single-threads at it, you're going to get the best performance out of it.

Helping all of this run smoothly is 4GB of dual-channel DDR3 memory, Corsair PC3-10666 memory to be more precise. While this is adequate and the system also ships with 64-bit Windows 7 Home Premium, we do think it's somewhat stingy considering the outlay for two extra 4GB SODIMMs would have been around another £50.

More pleasingly, the storage solution on the Cryo is a high-end delight. There are no less than three fixed hard drives, a 60GB boot Corsair SSD drive and then twin Western Digital 500GB drives combine into a RAID 0 for a total of 1TB of performance storage.

The drives certainly don't hang around, with the SSD returning an impressive 190.5MB/s average read, peaking at 250MB/s, while the spinning disk RAID averaged 103.6MB/s with peaks at 135MB/s. Of course the RAID was a factor of a hundred off with its seek times at 14.66ms, compared to the SSD result of 0.12ms.

To round off the system there's also a Blu-ray ROM slimline drive with the usual CD/DVD-RW capabilities. If movie entertainment is your thing there's a HDMI out, plus HDMI in alongside DVI out. There's a cable TV input and digital audio in/out.

Interestingly the laptop has built-in 5.1 audio – most manufacturers can't build in two decent speakers, never mind six. While the sound was solid, we found the surround effect negligible and the centre speaker seemed somewhat pitiful, making us resort to the quadraphonic mode while the whole lot lacked any real volume, which left us wishing for simple decent stereo sound.

Hilariously there is a battery, which with 1080p playback lasted a smidgen over an hour and with Far Cry 2 played a surprisingly long 50 minutes. But it's effectively useless, providing not much more than cover in case the mains-cable is kicked out.

Would we pay over £2,500 for this? Almost. Going back to the choice of Nvidia GeForce GTX 285M, which is a DirectX 10 part, you'd be better to simply walk away. The CrossFire Radeon HD 5870 Mobility model at just £56 more makes far more sense. Support for DirectX 11 really pushes it over the edge, but we're not reviewing that.

In the grand scheme of things, either model is actually excellent value. A similar Alienware system would set you back around £600 more, so for value-for-money Cryo has nailed it and delivered desktop-beating performance in a laptop, just not with DirectX 11.