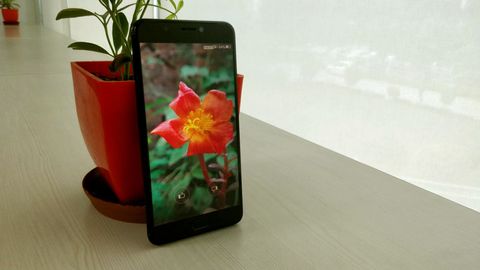 With its large display and superior sound quality, the Gionee A1 Plus is a smartphone made for media consumers on-the-go and will definitely attract them. While the phone offers a great battery life, its size and weight might disappoint those who prefer carrying a handy phone.

Dual camera on smartphones is one of the most common trend we've seen in 2017. Whether its from Chinese brands like Xiaomi, OnePlus, Oppo or old guns like Apple and Samsung. However, this setup may vary in terms of rear and front camera. There is also a sufficient increase in the demand of big battery phones as mobile phones are not just used for calling these days but are full-fledged media devices. To fill in the spot with a big battery and dual camera setup, Gionee launched the A1 Plus in the market. It is the successor to the Gionee A1 which was launched early in 2017 targeting selfie obsessed consumers.

Priced at Rs 26,999, the Gionee A1 Plus is a phablet, big in size and bigger in the battery department. The smartphone has a true competitor in the form of Xiaomi Mi Max 2, which is already owned by 3 million users. TechRadar India reviewed the Black variant of the phone and here’s what we found after two months of usage.

The Gionee A1 Plus is a big phone. Believe me when I say this, it's huge. It boasts of a 6-inch full HD display protected by 2.5D curved glass on the front with a metal back. The back has a smooth matte finish making the phone slippery in hand, so it's wise to use it with a case. The phone is quiet bulky at 226g, which  I found was difficult to use especially while calling, as I had to keep on switching it between my hands for holding it on long calls. The rounded edges give a smooth finish to the phone which also helps in gripping it tightly but one handed usage is not a thing here.

The front camera sits next to the earpiece and has a LED flash as well. The home button houses the fingerprint sensor with the navigation keys on sides of the button. The navigation keys are not backlit which makes them difficult to operate in darkness.

On the bottom lies a USB 2.0 charging port that is placed between the two grills, one is for the loudspeaker and other is for primary microphone. Surprisingly, the company hasn’t used Type-C port which is usually found in the smartphones at this price range. but it has a 3.5mm audio jack which sits at the top.

The phone has a slightly curved design with fine antenna lines at the back. It also holds the dual camera setup accompanied by the LED flash placed next to it. The company logo can be found just below the rear camera.

The 6-inch full HD display is something that catches the eyes right away as you look at it. Such gigantic IPS display offers great video watching and multimedia experience to the users. If you love watching videos on your phone then this phone is made for you. However, the thick bezels on either side of the display look a bit outdated but these can be ignored if you desire to enjoy your favorite movie holding a bright widescreen in your hand.

The screen will also add on to your gaming experience. Because of the size, it becomes easier to hold the phone and hover it easily especially if you are playing games like Asphalt 8. I personally enjoyed playing and watching videos on this phone. The colours were good and vibrant and I was able to operate the phone smoothly while staying indoors. I also decided to test the display outdoors in bright sunlight and found that it was difficult to operate the phone and the screen was hardly visible even after maxing out the brightness of the phone. I expected the screen to be brighter and readable rather than reflective but sadly, that's not how I expected.

Overall, the display of the phone is good for gaming and consuming multimedia content on it but that's majorly because of it's size.

Next Page Hardware, software and camera