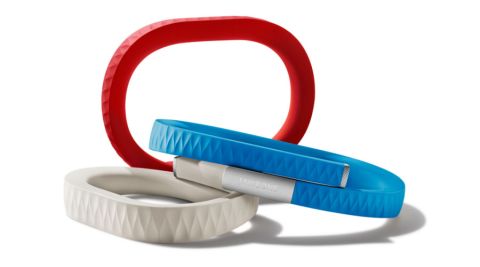 The Jawbone does what it does well, but we wish it did more, especially at this price.

Update: You'll struggle to find a first-gen Jawbone UP on the street, so it might be worth checking out our Jawbone UP3 and Jawbone UP2 reviews.

Like love, sensors are all around us. The astronomic growth in smartphone uptake means that most of the people you know now carry around a device that is constantly monitoring movement, light, sound and location. To date, the data captured by these sensors has found limited application, but this will soon change.

At its core, the Jawbone Up is a pedometer, but with pretensions of being much more. Within its "medical grade" rubber casing, the Up houses a number of motion sensors and shares the information it collects with a smartphone app for iPhones and Android.

Beyond counting your steps, Jawbone believes the Up is capable of monitoring your sleep as well. Using proprietary algorythms, the wristband and its software tell you how well you slept based on how you moved, sensing a difference between light and deep sleep and acknowledging when you wake up.

The accuracy of these readings is hard to guage though, and acting on the information it feeds back is entirely up to the user to figure out.

There is one thing for certain: the Jawbone UP is fantastically designed. Both the wristband and the app are sleek, easy to grasp and a pleasure to use.

The band itself is completely devoid of clasps or clips. It is a flexible loop that you slip around your wrist, and it sits comfortably below your hand. There are three sizes to choose from, with a size guide on the Jawbone site.

Best of all, the wristband looks good to wear. Our review unit is black, and it goes with every outfit in our wardrobe, from unwashed weekend wear to cocktail party dress.

At one end of the band is a small, square tip, that looks like mere decoration. In fact, this is the single button on the Up that users interact with. A long press on the button changes between day and night modes (you switch it before bed), and a double-press and hold command starts special modes, like a power nap, or the recording of an excercise session.

On the opposite end is a cap with the Jawbone logo on. When removed, a 3.5mm jack is revealed which should plug into every phone that the Up app is available on. Cleverly, this connection is used for data transfers from the band and also for charging -- there is a 3.5mm to USB adapter in the box.

Arguably, it would have been more clever to use Bluetooth for data syncing with smartphones -- the way its major competitor FitBit does. Tugging off the protective cap and plugging the wristband into a phone is no great strain, but we'll always prefer a wireless solution.

A full battery charge is good for 10-days worth of use, should you won't be using the adapter too frequently, which is a plus.

Monitoring the data collected by the Up is quite good fun, thanks to Jawbone's colourful and well-designed smartphone app. Large arrows point towards your daily goals and animate when you reach them; congratualting you on your small achievements.

You begin the Up journey by telling it a little about yourself: gender, weight, daily walking goal, etc. It keeps track of everything thereafter, showing you how you are doing each day, as well as collecting data over time into larger, more complex graphs.

Once or twice a day you plug the Up wristband into your phone via the headphone socket. Doing this syncs your data with the app.

You can enter food into the mix, but this isn't really designed as a calorie counter. The pre-set food options are extremely limited, and manually entering these details is a pain.

If you gain motivation from groups, you can select friends to add to your "team" and watch each others daily progress.

Not to delve too deeply into the existential, but what does it all mean? Data collection and graphing is one thing, but what are you to do with the information the Up feeds back?

Some of it is pretty simple. For example, after using the Up for a month it is clear that this reviewer needs to get up and walk more. If the average adult should walk 10,000 steps a day, I'm a few kilometres short. The solution here is pretty straight forward.

But what about sleep? Each night the wristband reports on the quality of sleep with coloured-strips that show how much deep sleep you had, how much light sleep you had and often you were awake.

My sleep looks bad -- I think. There seems to be far too much light sleep, only thin strips of deep sleep and several instances of waking up each night. It is interesting to gaze at the graphs each day, but without suggestions on how to act, the Up creates more questions than it answers.

On top of this, you have to take this information at face value, if you do at all. There are several times during the review period where the band has reported periods of being awake that we don't rememberm for example. Is it wrong? We have no evidence to the contrary.

On a similar note, the Jawbone could have a limited use for some people with sleeping disorders. This reviewer has sleep apnea and uses a CPAP machine to sleep comfortably. During the review period, data from the Up suggested poor sleep and prompted a check-up.

It is certainly a long way from being an effective monitoring tool for these sorts of disorders -- heart-rate monitoring would be necessary for starters -- but it is handy for (very) general guidance.

Comparing the Jawbone Up to its most obvious competitor, the FitBit One, it's easy to see just how much growth this category has in front of it.

When it comes to step counting, the Up feels significantly looser than the FitBit model. While we couldn't do a side-by-side comparison for absolute accuracy, we found that we hit our goal of 10,000 steps a lot more frequently with the Up, despite not changing our habits.

The One's screen is a welcome addition as well, giving immediate feedback of performance. To get a quick idea of how you are performing during the day, you need to manually sync the Up band, while the FitBit's OLED screen can give that information at the press of a button, as well as offering information about calories burnt.

The sleep function, on the other hand, is a much nicer implementation via the Up band. Because the Up is already on the wrist, it's as simple as pressing the button to switch to sleep mode.

The FitBit, on the other hand, requires the device to be slipped into a special pouch that wraps around your wrist and attaches with velcro. Because the tracker is in a pouch, it's much easier to forget to switch the device in or out of sleep mode.

The information you get from the Up, when displayed through the accompanying app, is also a lot more useful than the FitBit version, especially for sleep. The Up app's food counter is also more usable - although not necessarily more accurate.

Ultimately, the Up is a lifestyle product. It's designed to look good, while providing your information on your lifestyle so you can hopefully improve it.

The FitBit, on the other hand, is more of a tool, something that works to enable you to improve your lifestyle. They may do similar things, but if you're serious about accountability for your physical actions, the FitBit is a much more accurate tool.

It looks good and it certainly seems to work as intended, but if you were hoping that the Up was something more than a pedometer in fancy dress, then you'll be disappointed. Especially considering that At $149 it is twice the price of most step-counters. It certainly looks much better, and its smartphone app is well designed, but at the end of the day the functionality it collects the same data as a pedometer and leaves the same questions unanswered.