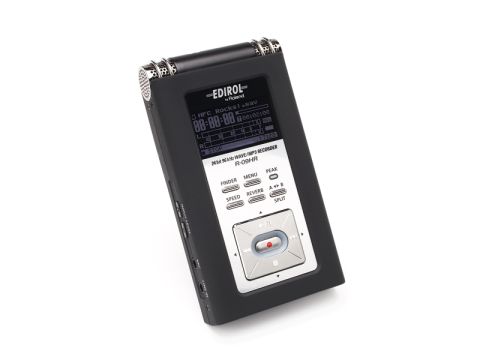 We found the R-09HR effective and easy to use

For audio quality, this digital recorder currently walks it on all counts. Nicely made, some clever features and easy to use to boot

A year or so ago, we reviewed Edirol's R-09, one of the first of these semi-pro, solid-state recorders.

We liked it a lot, finding its combination of quality and convenience extremely handy: subsequently (having used one long term) we became aware that the built-in mic amps aren't the quietest, but it's done good service via line in, with external mics and amps.

Just recently, Edirol brought out the 'HR' version, which adds 96 and 88.2kHz sampling, a few minor changes and additions and the 'Isolated Adaptive Recording Circuit'. Oh, and an infra-red remote control! The overall size is similar, just a few millimetres longer.

Having been favourably impressed by the original '09, we were frankly stunned by the HR. It maintains the high performance via line in, with noise a trifle lower, but using the internal mics or the mic input gives an astonishingly low noise floor; a full 6dB better than any other similar device we've tried.

The mics aren't entirely free of coloration, but they give remarkably good sound even so, with pretty decent stereo imaging if the device is carefully positioned. Operation is similar to the R-09, very straightforward and aided by the intelligently designed display (usefully a little larger than the older model).

Battery life is not the best, but we obtained at least seven hours of recording time from two 700mAh rechargeables - more if power-saving features are enabled. Up and download rates are decent, about 12x and 24x speed (for 16-bit/44kHz audio), build quality seems robust and the case has a useful anti-slip design.