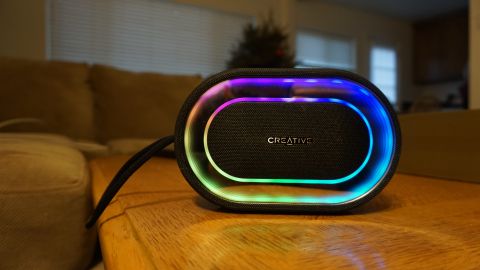 The Creative Halo is an average-sounding speaker packaged with a neat gimmick. It’s not the kind of speaker you’d want to play hi-res music on to soak up the audio fidelity, but it’s also far from being the worst Bluetooth speaker that’s ever crossed our desk.

Because music runs the gamut of emotions, we turn to our favorite songs to be inspired, elated, understood and, above all, entertained.

As a device that purely serves as entertainment, the Creative Halo has a lot of potential - thanks to its entrancing light show it definitely keeps your eyes as entertained as your ears.

What does that mean for the rest of us looking to be inspired, elated and impressed?  Despite being the highly entertaining, the $69/£60/AU$129 Halo is missing the clarity and nuance required to bring vibrancy to your music.

Crafted in the shape of a small pill, the Creative Halo sports an LED around the front-facing rim that puts on an accompanying light show for your music.

When activated, the light show is an exceptionally cool addition to the speaker - it can do one solid color, cycle through many colors sequentially or run the entire rainbow around the outer edge, all of which can be controlled via a button located along the top of the rubber exterior or remotely through the Creative Xpectra app for Android and iOS.

And while the light show adds a certain visual element to the Creative Halo, it comes at a price. Namely: battery life.

The 2,200mah battery is rated for up to eight hours of playback but we found it didn’t last for more than an hour or two with the light show going full blast before it shut off amid warnings of low battery life. The music would then continue for another hour on its own before the speaker would completely turn off. One way around this is to use the light show sparingly or, better yet, leave the speaker plugged in while the light show is running.

The speaker itself is wrapped in a mesh fabric with rubber pads along the bottom and a rubber top where you can find the playback controls. On the front there’s another ring of mesh fabric which is encircled by a reflective material.

Inside the Halo boasts two drivers and a hidden woofer along the back. Connection-wise you can expect a 3.5mm jack and a microUSB port that’s used exclusively for charging which, if you’re wondering, only needs about an hour of juice to go from empty back to a full charge.

While no part of the audio spectrum truly shines, it hits just the right notes: Mids are apparent if not totally clear, highs happen if only with soaring guitar riffs and bass notes bop out without any particular force - this makes it a decent speaker for Top 40 hits, but probably a less exciting companion for rock, EDM or rap.

Taken on its own and to a non-discerning ear, the Creative Halo is almost non-offensive in its musicality. But, stick it next to something like a UE Boom or even Creative’s own Sound Blaster Roar, however, and it’s clear that the Halo simply can’t stand up to the competition - it simply doesn’t have the clarity or bass response required to put up a fight. The other problem we noticed was some severe sibilance in songs where we’d never noticed it before.

On a better note, though, thanks to its use of Bluetooth 4.2, the speaker never lost connection to our phone - even in an apartment filled to the brim with electronics.

Not only does Bluetooth 4.2 ensure the connection doesn’t drop in a crowded environment, but it also keeps music artefact-free. It’s a feature that more speakers should use but, for some reason, don’t.

Last but not least, the Halo functions as a decent speaker phone - a feature often found on speakers around the same price or more.

The Creative Halo is a neat concept. It’s entertaining to watch and listen to for an hour or two at a time, and for someone who’s never heard speakers from UE or Bose, might be a perfectly fine fit. If you’re after a more pristine audio experience with weighty bass response and more consistent clarity in the mids and highs, however, the Creative Halo just isn’t it.