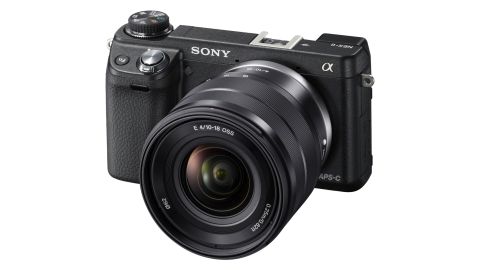 Sony's NEX-6 is a compact system camera with Wi-Fi

Sitting between the high-end Sony NEX-7 and beginner-to-enthusiast level Sony NEX-5R, the 16.1 million pixel Sony NEX-6 is compact system camera aimed at DSLR and DSLT customers who are looking for high image quality in a much smaller body.

A couple of key features distinguish the Sony NEX-6 from the Sony NEX-5R below it. First up there's a 2.359k dot OLED electronic viewfinder (EVF) built in, offering an alternative to the 3-inch 921,600-dot LCD screen for composing and reviewing images.

The Sony NEX-6 also has a pop-up flash (GN 6 @ ISO 100) that can be used to provide a little extra illumination when needed, as well as a hotshoe that uses a more standard design so that it can accept third party flashguns. Extra contacts at the back of this shoe also make it useful for accepting other accessories.

Like the Sony NEX-5R, the Sony NEX-6 has Wi-Fi technology built in to enable images to be shared direct from the camera via a computer, smartphone or tablet.

The camera is also compatible with apps that can be downloaded from Sony's PlayMemories camera apps service. This include apps such as Picture Effects, Remote Control and Direct Upload (to Facebook or PlayMemories Online). More apps will become available over time.

Being aimed at enthusiast photographers, the Sony NEX-6 has program, aperture priority, shutter priority and manual exposure modes, but there are also options to suit less experienced photographers, including a collection of scene modes.

As usual now there's a collection of digital filter effects (Picture Effects) that can be applied to images as they are captured (with a preview in the EVF or LCD), but disappointingly they can only be used when shooting JPEG photos, not raw files.

Videos can be shot in any exposure mode, and it's possible to change aperture during filming, but you can expect to pick up the sound of settings changes being made, since there is no external mic port.

A new 16-50mm power zoom lens has also been announced in conjunction with the Sony NEX-6. This is roughly half the size of the standard 18-55mm kit lens that has previously accompanied NEX cameras.