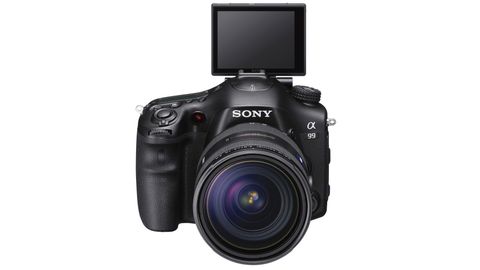 The Sony Alpha a99 is Sony's first full-frame DSLT

After a four-year wait, Sony has brought out a replacement to the full-frame Alpha a900 camera, the 24.3MP Sony Alpha a99.

Unlike the Sony a900, which was a DSLR, the Sony a99 is a DSLT, or Digital Single Lens Translucent camera. This means that instead of having a mirror that flips up to enable the exposure to take place, the Sony Alpha a99 has a fixed translucent (or transmissive) mirror that allows 70% of the light reaching it to pass through and onto the imaging sensor.

It also means that 30% of the light is reflected onto the camera's phase detection AF sensor - enabling fast focusing during live view use and video, recording as well as faster than normal continuous shooting rates.

However, it is still compatible with Sony's DT lenses that are designed for use on its APS-C format DSLTs and DSLRs, automatically cropping to the smaller frame.

Sony has reduced the thickness of the sensor construction to reduce shading of the photo diode to boost the image signal and reduce noise levels. This could be important in a camera that only transmits 70% of the light entering the lens to the sensor.

The company has also employed a multi-segment optical low pass filter from its broadcasting cameras to help maintain resolution while reducing moiré patterning.

This sensor is coupled with a new Bionz processing engine for faster processing of 14-bit raw files.

Interestingly, the Sony Alpha a99 actually uses two AF sensors, one in the usual location above the mirror-box with 19 AF points (11-cross type) and the other with 102 points over the image sensor itself.

Only the 19 points on the first sensor are user selectable - the remainder are support AF points that help with tracking moving subjects. It sounds very promising, but with less light reaching either sensor than with a DSLR, it will be interesting to see how the system performs.

Another consequence of using Sony's Translucent Mirror Technology (TMT) is that the viewfinder is electronic, since an optical finder would be very dim. For some this could be a deal-breaker, but the unit inside the Sony Alpha a99 is an OLED Tru-Finder with 2,359,000 dots, and it covers 100% of the frame.

There's no built-in flash, but there's a new Multi Interface Shoe, which has a standardised design rather than Sony's usual proprietary shape, making it compatible with a wide range of flashguns and accessories.

Owners of older Sony and Minolta flashguns will have to buy an adaptor to mount them on the Sony Alpha a99.

Other niceties include built-in GPS technology to tag images with location data as they are shot, and audio in and out ports for sound recording and monitoring during video.

Videos can be recorded at Full HD and can be started from any exposure mode. However, if you want to set particular shutter speed and aperture values, the camera needs to be in Video mode. Serious video shooters will love the peaking feature for manual focus that indicates the areas of sharp focus.