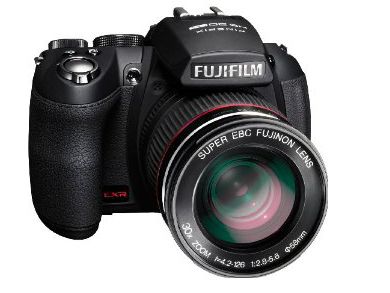 However, like its feature package the HS20's design aims to improve and here we see the LCD offering 97% field of view and doubling its predecessor's dot count – so that the new LCD boasts 460k dots. As good as that sounds, an increasing number of recently launched bridges and indeed some – high-end compacts now offer 920k dots with the ability to vary brightness and contrast.

As handy as the tilting feature is on the HS20 it really lacks the flexibility, witnessed on some Olympus and Sony cameras for instance, to make it the stand-out feature Fujifilm perhaps had in mind. For example when shooting in landscape format the screen can be pulled out and moved up and down – making it handy for shooting overhead, at hip level or even on the ground.

However, when shooting in portrait format the LCD cannot be twisted to provide higher and lower positions, so its lack of flexibility means that it can only be moved several centimetres left or right – and vice versa. So although it goes some way to aiding composition and reducing some viewing issues in harsh light, many users may find it limited in use. Hopefully the next generation of Fujifilm super zoom cameras will extend the screen's reach and flexibility further to make it a real competitor in this field.

Weighing 730g when fully loaded, the HS20 isn't heavy in the hand yet feels reassuringly durable and solid – however this could be due to its stockiness which compared to some entry-level DSLRs, looks a little paunchy. Buttons and short-cut controls litter the camera surface like acne, which may please some shooters who like to have every variable in fingers reach, but the sheer volume and assortment of controls could overwhelm novices.

The shooting dial is packed with options; including several auto modes as well as manual and semi-manual controls for those who hunger for more control.

A one- touch movie record button is positioned in perfect reach of the photographer's thumb and delivers full HD 1080 30 fps with stereo sound, as well as other High Speed Movie options, which include 320 x 112 pixel capture at 320 fps or 640 x 480 pixel capture at 80fps, options that allow users to get creative with movie-capture be it in high-definition or super-slow motion, what's more users can capture video in lower light thanks to the inclusion of the EXR HD Movie mode.These one touch facilities are effortlessly simple to affect and are sure to make the HS20 a viable option for video-makers as well as photographers.

The in-camera menu and display user face have had a notable revamp to improve navigation, and whilst on the whole it promotes a logical layout there are a few irksome problems that mark its overall handling down, for example in Display, users can either bring up the framing grid or the histogram – but not both at the same time.

Elsewhere we found the processing speed of the HS20 to be slower than expected, with RAW files taking over a second to complete.