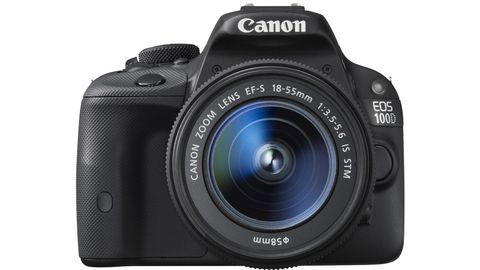 Recommended
The Canon EOS 100D is small and lightweight

What Canon has managed to produce in the EOS 100D is pretty special - a very small body that retains the same DSLR stylings of its larger siblings, and more importantly, produces impressive image quality. That's quite a feat.

The interchangeable lens camera market has shifted significantly over the past couple of years. Where once the bulky DSLR was the undisputed king, now smaller, compact system cameras are making significant headway into stealing the crown.

Canon finally introduced its own CSC in the shape of the Canon EOS M last year, but now it has also released the Canon EOS 100D - also known as the Canon EOS Rebel SL1 in the US - which is the world's smallest and lightest DSLR.

Unlike the Canon EOS M, it has the same traditional DSLR stylings, but the majority of the interior electronics have been downsized.

The major exception to this is the sensor, which remains APS-C sized and features 18 million pixels - although the module itself has been thinned to fit inside the smaller body. Canon says that this is a new sensor, but it should put in the same kind of performance as the one in the EOS 650D/700D.

The sensor is a hybrid CMOS AF II sensor, the second generation of the type of sensor which was found in the Canon EOS 650D and Canon EOS M. This has phase detection pixels on the sensor to assist with autofocus when shooting video or using Live View. These autofocus points cover approximately 80 per cent of the sensor, which should make for more accurate focusing, right the way across the frame.

Canon is aiming the 100D somewhere between the EOS M and the EOS 650D. Its small body size has led to the tagline, "A DSLR you'll never want to leave behind." It also has a lot of fun features, designed to appeal to the beginner user. These include creative functions such as Kids' mode, Candlelight mode and Food mode.

There's also a range of digital filters, the same as those found on the Canon EOS M and Canon EOS 650D. For the first time, however, in a Canon SLR you can now see how these effects will be rendered on the screen (when shooting in Live View) before the shot is taken - this is also possible with the M.

There's also Dual Shot Mode, which records one image with the filter, and one without, should you change your mind at a later date.

Despite being roughly the same size as some of the compact system cameras on the market, the Canon EOS 100D still has room for an optical viewfinder that boasts 0.87x magnification and 95% coverage.

Like both the Canon EOS 650D and Canon EOS M, the Canon EOS 100D has a capacitive touchscreen. It is fixed, unlike the 650D and 700D, which have articulating screens. Other features include 4fps shooting, Full HD movie recording and Intelligent Auto.

Although it is a lot smaller than most of Canon's other DSLRs, it still retains the standard Canon EF-S lens mount, making it compatible with the company's huge range of optics. Of course, unlike compact system camera optics, these remain quite large - in other words, don't expect the entire system to be smaller just because the Canon 100D has been shrunk down.

Canon could have chosen to use the EF-M mount, as on the EOS M, but the lens range here is much more limited. Those for looking for something small and compact may want to consider the wide range of compact system cameras currently on the market.