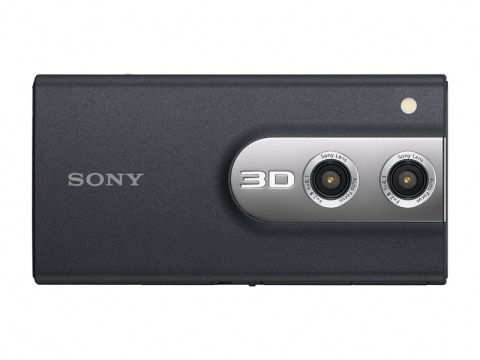 A strong choice for 3D-filmmaker wannabes, but you can find some excellent 2D cameras in a similar price range.

The Sony Bloggie range arrived relatively late to the 'simple video recorder' party, well after the advent of the Flip camcorder.

But with Flip's demise, the Bloggie finds itself ideally placed to become the new king of quick video capture.

In fact, with this new version, Sony is getting even more aggressive when it comes to the technology inside its little camcorder device. The Sony Bloggie 3D MHS-FS3 is, unsurprisingly, a 3D-capable camera, as well as a competent 2D video camera in various formats.

Like with the HX-WA10, we pleased to see a 60fps recording more, meaning you can do some slow-motion stuff once you get the footage on your computer.

This is all recorded using the fancy new Exmor CMOS sensor, which impressed us when used in the Sony Ericsson Xperia Arc. Aside from recording video, it takes still photos in 2D and 3D. For the latter, you're limited to a maximum resolution of 1920 x 1080, but 2D images can be taken at up to five megapixels.

Of course, the 60fps mode is just a footnote here. It's that Full HD 1080p 3D recording we're really interested in. When you're recording in 3D, the 2.4-inch display on the back of the Bloggie 3D becomes an autostereoscopic 3D display, similar to that used in the Nintendo 3DS, meaning you can view the 3D footage you're recording without the need for any special glasses.

It isn't the best 3D display you'll see – stray just a millimetre or two away from centre and the image will become 2D again – but it's nice to have a simple and quick way to see what sort of effect being in 3D will have on the footage you're recording. When you want to view your 3D footage back, the Bloggie 3D can export it to PC using the Bloggie software, but it also has an HDMI port for connecting to a 3D HDTV.

Footage is recorded to the Bloggie's 8GB of internal memory, and there's no way to expand this with with an SD card. This limitation is a shame, and restricts you to taking less than two hours of 1080p footage. You can get up to four hours if you shoot in 720p at 30fps, though.

That said, the battery is only rated for 80 minutes of continuous 3D recording, so the amount of footage you shoot may not be the limiting factor, ultimately. To charge the Bloggie 3D, you'll need to connect it using the built-in USB connector, so that gives you a chance to offload your recorded footage anyway. The whole situation isn't ideal, but it's easily manageable.

The Bloggie itself is a brilliantly made bit of hardware. It's got a premium feel to every part of it, from the matt plastic finish on the front, which makes it easy to grip, to the sturdy pop-out USB connector and the subtle texture on the buttons. Even the cover for the HDMI port doesn't feel like it'll snap off any time soon. The glossy back and screen picks up fingerprints like mad, but they wipe off easily.

There's a threaded hold for tripod use, but it's on the short edge of the Bloggie 3D, and the device can only record in 3D when held in landscape, so tripods that can't angle their heads are useless with it.

The Bloggie 3D will set you back around £200 online, which is no small change for this kind of point-and-shoot camera. You're really paying for the 3D capability – the Bloggie MHS-TS20 Touch Mobile does 1080p 2D recording and costs only around £130 online.