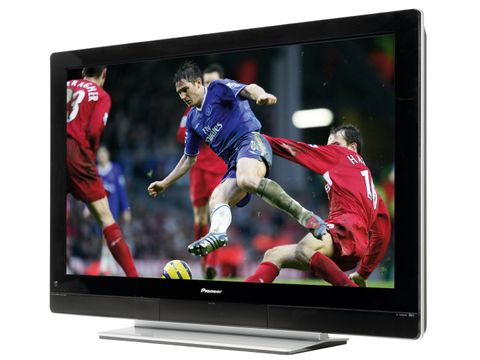 If we were going by looks alone in this test, Toshiba's 37-inch newcomer wouldn't be an achiever. The finish is a bit dull and the chassis' design looks unfinished, or at best, rushed.

Otherwise, this display starts to impress from the get-go, with dual HDMIs and component video inputs to go with the usual Scarts (unfortunately only one of which is RGB-enabled) and analogue video connections.

There's also a PC VGA input, that allows the set to double as a computer monitor. The only thing that's missing is an S-video jack. But the real actions is with the features list.

Toshiba has fitted this TV with its Active Vision LCD picture processing suite. This is designed to improve colour rendition, sharpen images and reduce noise: claims we've have heard before, but this system has impressed us before.

The LCD also includes settings to optimise the display for use as a PC monitor, and adjustments for brightness, saturation, and colour hues. There is one thing missing: a digital tuner. For that you need to get hold of this set's bigger brother - the 37WLT66 - which costs £200 more.

Throwing our upsampled Fight Club DVD at this TV made it clear that Active Vision can do what Toshiba claims.

Details were extraordinary with textures that were so clear it is tempting to touch the screen to feel them. Pleasingly, grain, motion smearing and dot crawl are all absent.

The movie's darker scenes - such as the Narrator's climatic confrontation with Tyler, and the bruising basement scraps - are rendered with clarity and subtlety. Colours were vibrant as well: the penguin's cave comes out as chillingly blue. On occasion skin tones do seem very slightly doll-like, but that really is nit-picking.

One of the most impressive things about the picture is the almost total lack of motion smearing - a common problem with LCDs. During the Fight Club's brutal scraps the picture stayed sharp.

The only reservation with this TV is its audio performance. While dialogue remains audible and sound effects are serviceable, the speakers are a let down, giving weak bass levels and compacted midtones.

Toshiba has built a set that's a wonderful performer for a low price, capable of delivering some of the best pictures seen in LCDs. Sky and Telewest customers should consider the 32WL66 over its IDTV brother, the 37WLT66, as the £200 price difference will go a long way to cover the a year's subscription to those broadcasters' HDTV services.