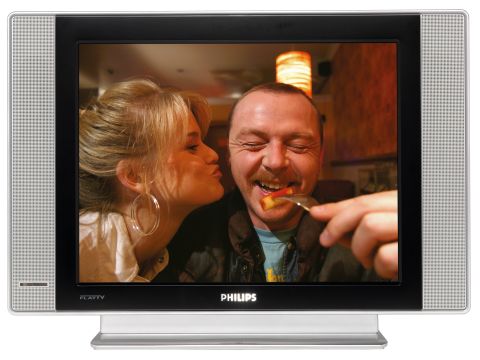 To say the 20PF4121/05 is a bizarre mix of low and high specs is an understatement. Heaven only knows how Philips arrived at the TV's final features list; maybe it just threw a bunch of cards in the air to see how they landed. The almost schizoid feel of the TV starts with its styling. An opulent looking, polished black screen frame is appended on either side by cheap and cheerful, grey speakers.

Then there's the way the screen adopts a traditional 4:3 aspect ratio rather than a widescreen 16:9. At first this seems fair enough, since anyone buying a 20-inch TV will likely be feeding it a basic analogue aerial, from which the vast majority of broadcasts still use the 4:3 ratio.

But then it turns out the TV can take high-definition signals via a provided DVI input - and of course, all HD signals are widescreen. The TV does at least provide a widescreen mode, but this made us think it might have been better if the TV had been built widescreen and then provided with a 'stretch' mode for watching 4:3 fodder.

The DVI jack we mentioned is itself an anomaly on a set that otherwise couldn't be more lowbrow in its connections, sporting as it does just a single Scart, bog standard composite and S-video inputs, and an (analogue only) tuner port. We're not complaining, though, since as well as the HD capabilities we already mentioned, the DVI can take PC feeds.

The incongruities continue as the effort Philips has put into making the TV HD and PC capable is undermined by a native resolution of just 640x480 pixels - hardly the stuff of HD/PC dreams. And still there's one more curiosity; tests reveal that while the screen can take 720p HD signals, it can't handle 1080i. Philips seems to have put this TV together just to try and catch us reviewers out.

Thankfully, the most consistent thing about the 20PF4121/05 is its picture quality. For starters, the picture is unusually bright compared with many small-screen rivals, and the high light output is joined by vibrant, well-saturated colours, which despite their vibrancy remain believable in tone for most of the time.

The picture looks dynamic and solid, too, thanks to some really very acceptable black levels. Sadly, the TV's one big weakness is its soft pictures, especially with analogue tuner sources - the probable source of choice for many.

Some blame for this softness must be apportioned to the set's rather smeary handling of moving objects. Sonically, the 20PF4121 is solid for a 20-inch LCD, pushing its sound over a surprisingly wide area while retaining plenty of soundstage detail and even, incredibly, a little bass.

In the end, for all its inconsistencies, the 20PF4121 isn't a bad TV if you just ignore all of its quirks and curiosities. We can't help but wonder, though, if the TV's core talents might have been made more affordable if Philips hadn't thrown in all the unnecessary extras as well.