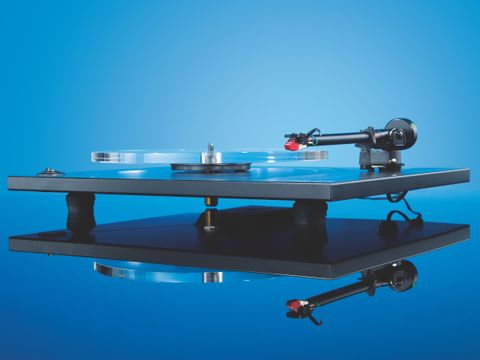 The Edwards Audio TT1 is a simple design with excellent sound

The Edwards Audio TT1 starts at a very reasonable £325 without a cartridge, but is also available with an Edwards Zephyr £60 cartridge for £375 (a £10 saving when purchased with the deck as a complete record-playing package).

This cartridge is similar to the popular Goldring Elektra, supplied with this review sample on the highly respected Rega RB250 [OEM] tonearm.

Clearly this turntable is targeted at those who want to be able to enjoy their vinyl without having to remortgage their homes or sell any of their internal organs to fund the investment.

The TT1 differs from the timeless Rega P2, upon which it is based, in that it features a clear, naked acrylic platter. No mat is fitted nor recommended – "unless you really want to mess up the performance," says the designer. He continues, "We tried all sorts of mats and they all made the player sound worse.

"The core design of the P2 has been fine-tuned over twenty-five years or more and it is hard to improve it now without measures that push the retail price through the roof.

"Conversely, it is easy to tip the balance and ruin its performance with ill-considered modifications. We thought about modifying the bearing to use ruby, which we know makes a worthwhile improvement, but that costs far too much at this price level. Maybe we will offer it as an after-market upgrade someday.

"For now we simply use an enhanced grade of oil, which produces a clearly audible improvement in the sound. We will be releasing a power supply upgrade for the TT1, which will also benefit standard Rega turntables and those using the same motor."

Many modifiers spend vast sums of money tweaking their RB tonearms. But, on an entry-level turntable this makes as much sense as bolting a Formula 1-specification engine into a Toyota Yaris.

Having the arm rewired and a discrete earth connection made (about £65 from Audio Origami), and maybe replacing the counterweight and stub (around £30 from Moth) might be sensible limits here. Silver wiring, for example, seems way over the top in this instance, unless you have money to burn and an enormous passion for tweakery.

The TT1 is a delightfully simple design, which virtually guarantees its build integrity: there is so little to go awry.

The platform on which it is based, the Rega P2, or Planar 2 as it was known in its early years, was always the de facto and totally consistent sound-quality benchmark by which other turntables were judged. As far as most people were concerned the question about any other turntable – at any price level – always was, and still is, "Does it outperform the Planar 2?"

A great many turntables, even today, still fail to come near reaching its reassuringly high standards. It might not be the most explicitly revealing performer on the planet, but it has a wonderful overall balance of attributes that make it exceptionally easy to enjoy and appreciate.

In short, it communicates music's fundamentals and more with great conviction and ease. The Edwards Audio modifications help it climb a rung or two further up the performance ladder.

The TT1 starts off well by tracking securely and not making a meal of surface noise. It is very quiet even with old and frequently played albums. It further surprises by producing a stable, solid soundstage with a respectable representation of front-to-back depth on suitably recorded albums.

It exhibits a very acceptable, close-to-neutral tonal balance that is fully exploited by the bass, drums, guitars and vocals on Rockin' Jimmy's album Rockin Jimmy and the Brothers of the Night. First off, the bass plays clear tunes with distinct and precisely pitched notes, all perfectly in tune with the lead and rhythm guitars and not muddied or obscured by the kick drum or any euphonic warmth.

Cymbals cut distinctly through the mix and they, the rest of Chuck DeWalt's kit and Gary Cundiff's positively driven bass, urge every track along with real determination. Piano has solid intonation and there is no wateriness or wavering about its presentation.

The 180g pressing of Gwynneth Herbert's All the Ghosts, further shows how the bass is tight, tuneful, fast and weighty. Her voice has all the quirky character and expressiveness we heard when we saw her perform live.

The TT1 conveys the emotion and humour of her performance with alacrity and never reduces her – or any vocalist – to sounding like a Karaoke performer. Equally, it renders the relationship between the singer's phrasing and the band's playing with true lucidity and precision.

The TT1 sounds characteristically Rega Planar-like, but there is a shade more bite and 'edge' – in a positive sense – that gives music an enhanced vigour and rhythmic urgency.

Overall, the TT1 has all the positive qualities of the Rega P2 and the Goldring Elektra is a highly complementary choice of cartridge. The combination succeeds in conveying all the attributes necessary to make music engaging: it has dynamism and is secure in its portrayal of pitch information.

It is well-balanced tonally and has a pleasing openness about its sound: it lets you listen beyond the first layer of a mix and enjoy, say, the backing vocalists' contributions to a song.

At its price, it is a tough proposition to beat.