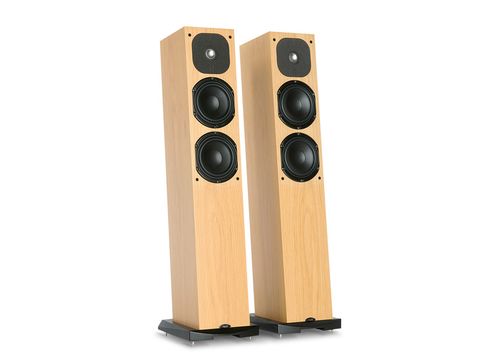 'Leaning back' compact has a smooth, even-handed and open sounding balance

A well-established operation, Neat's reputation was founded on a small, but very communicative standmount called the Petite. The product portfolio has expanded considerably since then; the four stereo pairs in the Motive range consisting of three ultra-compact floorstanders and a standmount.

Though still quite small by any standards, the two-and-a-half-way Motive 1 is the largest of these, a little taller than the two-way Motive 2, in order to make room for an extra bass-only driver beneath the main bass/mid driver.

The twin 135mm drivers have 95mm cones, while the tweeter has an inverted 25mm titanium dome with integral pleated surround. The price per pair has risen, but quite modestly from £1,200 to £1,490 since our original review more than five years ago.

The most obvious visual feature here is that the whole enclosure is tilted backwards a few degrees. This helps keep the visual intrusiveness to a minimum, while also assisting the time-alignment and directing the normal listening axis upwards towards a seated listener.

The speakers come already fitted with carefully shaped and fully spiked plinths – fortunately giving the unpacker plenty of warnings. The latter is presumably a precaution to ensure that the port, which exits through the enclosure base and plinth, is not accidentally blocked (though port-blocking bungs are provided, should this be preferred). The plinth also extends the enclosure footprint, significantly improving the overall physical stability.

The enclosure proper comes in a choice of oak, maple, cherry and rosenut wood veneers as standard, and sits on a shaped black MDF plinth. Signals are fed via two pairs of well-spaced terminals.

Despite its unquestionably superior neutrality, the panel as a whole didn't particularly warm to the Motive 1, a situation that defies simple explanation. There was some enthusiasm for the bass strength and weight, and for fine stereo imaging, but also criticism of a rather undernourished and reticent midband, resulting in a certain blandness in character, and also some sibilant exaggeration at the top end.

This is a very self-effacing loudspeaker, smooth and even-handed, but also a little cool and thin-sounding overall. It's not exactly the last word in dynamic expression and excitement, but the basic dynamic range is very satisfactory. Some pinched and nasal midband coloration is audible, though it's not too severe.

The imaging is particularly interesting. Though not particularly transparent, it's generally satisfactory enough, with a wide soundstage and little or no tendency to hang around the boxes. However, if considerable care is taken to adjust the positioning of both speakers, the sole person able to listen at the apex of an isosceles triangle (ie equidistant from both loudspeakers) will be rewarded by a considerable increase in soundstage precision and focus.

Although the competition does seem to have become rather tougher during the five years since its introduction, the Motive 1, with its superior smoothness and neutrality, remains an attractive and effective package.