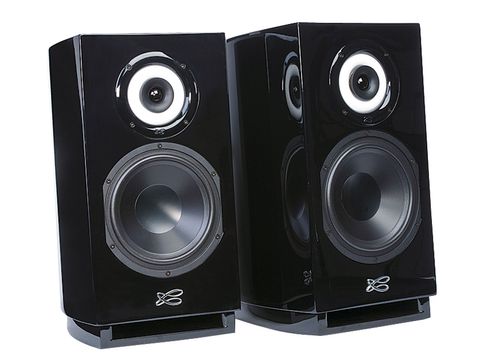 A real enthusiast's choice, which if looked after is a powerful and engaging choice, with unusually stable, consistent imagery, both on- and off-axis, as well as detail and expression

The Cabasse Bora doesn't quite resemble other loudspeakers, any more than it apes other features of its opposite number from other producers.

Yes, it does look like a bog-standard eight-inch, two-way, reflex-loaded design, but it doesn't follow all the usual rules, that's for sure. A pair will set you back a not insubstantial £2,200, so this is a serious design that costs serious money.

The business end of the reflex loading port is the long slot at the base of the front panel. The slot acts as a mouth, in effect baffling and dispersing the output of the real port, which vents from the points downwards-facing circular exit hole, which is mounted on the internal hidden base of the loudspeaker.

The forward-facing slot provides room coupling and its large physical area means wind velocities are lower than in the main port structure, which helps mask port-generated wind noise. The limited height of the slot also means it reduces vertical height of the enclosure compared to a conventional port.

This means that it also removes the requirement to vent the enclosure at the rear, which would have introduced phase integration.

The Bora may appear like a conventional two-way, but it isn't; discounting the unusual port design, closer examination shows that the tweeter is mounted coaxially in the centre of the midrange driver, which makes this a point-source compound driver whose radiating element is the white-coloured annular ring surrounding the tweeter diaphragm.

Bass comes from a proprietary Duocell cone driver. Duocell – a material that was developed as long ago as the 1980s – is a variable thickness, low-density structural foam which is said to be light, rigid and well damped. So notwithstanding first appearances, the Bora is, in fact, a true three-way loudspeaker.

Add these noteworthy design elements together and the obvious effect is to shrink the height of the loudspeaker, which is a major factor in most Cabasse designs, not just this one.

The coaxial mid and treble driver also plays a key part in defining the performance of the Bora, especially in the areas of stereo imagery and, in particular, the uniformity of dispersion in the two planes, as well as mitigating the effects of phase errors around the crossover due to the geometry imposed by standard vertically stacked designs.

The speaker's side panels are curved for stiffness meaning the internal cavity is irregular in shape, which has a positive effect on enclosure resonant behaviour. Around the back is a single pair of 4mm binding posts, though it coped well with spade terminals on the test. No provision, however, is made for bi-wiring. Our test sample was supplied in a high-quality gloss black finish.

The surprises continued through to the listening. With most hi-fi components, and this certainly includes loudspeakers, technical and musical worth generally go hand in hand, although there are some (in)famous example of products that are technically so-so, yet are capable of delivering great sound, though typically only with a carefully selected choice of music.

The linkage between the yin and the yang is not completely established with the Cabasse, which has some clear (if relatively minor) technical deficiencies, although it almost always delivers great music.

The most obvious of the technical deficiencies concerns the levels of background colouration associated mainly with the low to mid-treble. The effect is to add a degree of thickness or congestion to voices in particular.

This is quite obvious on audition, though it is never excessive. There is some bloating of detail in the upper bass region, too though the bass itself is nicely extended and 'breathes' well. The colouration is probably a side effect of the higher than usual treble crossover.

Despite these objective shortcomings, the Cabasse performs extremely well. We ran an extremely wide variety of music through the Bora, using more than one amplifier, but concentrating for much of the time on a simple, but high-power integrated amplifier from Belles.

The Bora generates a strong, punchy sound, with plenty of presence and quite strong dynamics, which if anything is enhanced by the higher than expected sensitivity – a finding that has no technical justification, but is often the case with high-sensitivity loudspeakers.

More to the point, the Bora has fine imagery of the kind often associated with Kef Uni-Q or Tannoy Dual concentric designs, but with unusually fine midband behaviour, which benefits because the midrange diaphragm doesn't 'cup' the tweeter, reducing a known source of colouration.

The single-point source construction of the mid and tweeter is a key factor in ensuring that the sound remains consistent on-and off-axis, both laterally and vertically, and that no matter the listening axis, it is virtually impossible to hear the join between the two drivers.

The bass is not coincident with the mid and treble of, course, but because its output doesn't stray far into the midband, which is where the ear's direction-finding buds are tickled, consistency is retained throughout the audio frequency band.

What the Bora offers that many others don't is a clear sense of musical flow and narrative and an organic way of dealing with musical information that makes it very easy to engage – not just with the notes, but with the expressive qualities that the performers bring to bear.

Here is a classic example of a loudspeaker that is more than the sum of its parts, where musical communicativeness triumphs over strict technical accuracy. The compact packaging, of course, is a real boon. Nevertheless the Cabasse Bora doesn't deviate far from the straight and narrow, but it does offer superb, stable three-dimensional imaging, bold dynamics and a surprisingly potent bass.

You will need to choose your amplifier with special care and ensure that there is plenty of room around the speaker so that it can breathe properly and help balance the mid and bass in the listening room. The Bora also rewards being used on solid stable stands, such as the Atacamas used for this test.