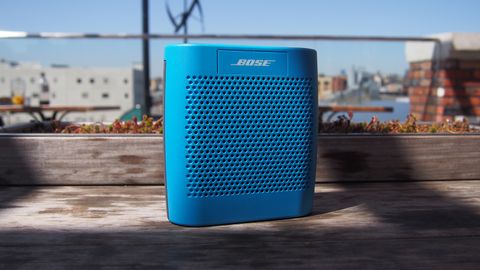 Sound performance takes the cake as the Bose SoundLink Color's most impressive feature. But wait, there's more. The colored design adds some much needed spunk to Bose's audio lineup, and the battery life is superb.

Bose has recently taken a keen and welcomed interest in making some very colorful products. This change is most apparent if you compare the difference between the straight-faced, executive style of the QuietComfort 15 to the Bose QuietComfort 25. These recently launched over-ear headphones received an injection of jubilance that goes a long way in making its design fresh, while remaining loyal to Bose fans.

Continuing with this lively style, Bose has introduced the SoundLink Color. For $130 (£120, AU$180), you can nab yourself one of these affordable Bluetooth speakers splashed in one of five vibrant colors. The form factor is small, but thankfully, that doesn't hinder its ability to pump out a full sound in the slightest.

The vertically-oriented Bose SoundLink Color offers a thin and discreet build compared to its larger SoundLink brethren. However, compared to other miniature Bluetooth speakers in its class, like the UE Mini Boom, it's larger in size.

Weighing in at just over a pound (half a kilogram), the SoundLink Color rocks an all-plastic construct. Plastic may get a reputation for being cheap, but the material is elegantly implemented here. The sky blue plates covering the outside of the speaker contribute greatly to the presentation, giving it a simple, but appealing look.

The perforated grille dominates the front of the speaker allowing the impressive sound to flow. Bose stuck a big ol' logo near the top of the speaker, but it doesn't get in the way of the looks too much.

Around the sides, the speaker shows off its curves. The plastic plates that make up the enclosure come together and give way to a strip of rubber that wraps the device, which provides a protective bumper of sorts.

Similar to the front, the back of the SoundLink Color also features a grille, although it's much smaller. On the bottom corner, Bose included a small selection of ports: an auxiliary port for listening over a wired connection and a micro USB port for charging the speaker.

On top of the speaker, there is a rubberized panel containing six buttons. From left to right, the speaker features a power button with an LED to indicate battery status, a Bluetooth pairing button and a switch for auxiliary mode. The remaining buttons control the play and pause functions, which also skips and reverses tracks with a double click and triple press, respectively. The volume buttons round out the offering of controls on the SoundLink Color.

Inside the box, there isn't much to see. Bose includes a micro USB cable and a wall charger inside the package.

To sum up Bose's design, don't fear the plastic. The speaker's colorful presence is pleasing and makes for a sleek, playful addition to your entertainment center, bookshelf or wherever else you put it around your pad.

Bose doesn't have as much experience in the budget arena as it does in making premium products, so how did taking the affordable route turn out with the SoundLink Color? In many ways, extraordinarily well.

Bose more than keeps its promise of lengthy battery life for this speaker, kicking out the jams in my studio apartment past the advertised eight hours of juice. Finally, after a long day of cleaning at a medium volume, the SoundLink Color entered a peaceful sleep just shy of the nine hour mark.

In that regard, Bose makes it known that its budget Bluetooth speaker is a worthy contender in this price range. But there's one more card up its sleeve that puts Bose above the competition: sound performance. What the SoundLink Color can push out is much more impressive than what's usually heard in similarly sized – and priced – Bluetooth speakers.

While there's a heavy emphasis on lows and pounding bass, mids and highs don't get lost in the message. This speaker has no issue filling a room with even sound at a variety of volumes.

The UE Mini Boom comes the closest with a surprisingly bass-heavy sound. But some of that boom muddles the mids and highs in the sound profile.

The Bose SoundLink Color stands alone in this category, and represents a spectacular value for those seeking a Bluetooth speaker that has heavy-hitting sound chops.

If sound performance and battery life are the only features needed to sell a product for you, by all means, pick up this Bluetooth speaker. Just be aware that Bose has otherwise dropped the ball, stocking the SoundLink Color with a fairly limited set of features.

Don't knock this speaker for its straight plastic build. The design puts forward a slick, modern look that, in one of five popping colors, is sure to appeal to many.

When it comes to performance, the SoundLink Color has it in spades. From the overachieving battery life to the even audio, this Bluetooth option is a workhorse that outpaces the competition at its price range.

Barring the fantastic sound and battery performance, that's about all there is to see with the Bose SoundLink Color. Those hoping for a feature-dense option here will be sorely disappointed. If the lack of features like NFC, charging over USB and conference calling are a deal-breaker, check out the $99 UE Mini Boom for a cheaper option that fills these blanks.

Otherwise, if you're simply a fan of hearing your music pumped through some beautiful pipes, there's a lot to love in the Bose SoundLink Color. We're not too surprised with the excellent performance, but the vibrant design and the affordable price tag make this speaker almost too good to pass up.