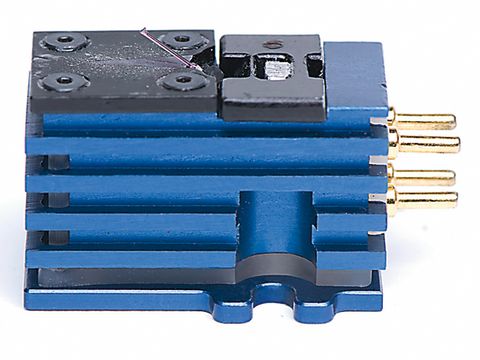 Soundsmith's Strain Gauge cartridge is smarter than the average cartridge

This revolutionary approach to vinyl replay delivers truly exceptional results, with a clean, sweet clarity. A wide range of feature options are available, the only disadvantage being the very high initial purchase price

The Soundsmith Strain Gauge phono cartridge, as the name unequivocally points out, uses strain gauge elements to 'read' the vinyl groove – changing the rules completely. The magnetic principles that have hitherto been almost universal need no longer apply.

Strain gauge cartridges aren't new, however. The idea and the occasional example has been around since the euphonics Miniconic back in the 1960s. Sao Win reintroduced the idea in the 1970s, but neither of these had a very noticeable impact on the marketplace.

That might well be because the market simply wasn't ready. The amplifiers of the time had built-in phono stages specifically intended for various types of magnetic cartridges, complete with RIAA equalisation, because magnetic cartridges read groove velocity.

However, a strain gauge cartridge is totally different. it requires an external power source to operate (it's not a transducer) and it uses what effectively amounts to a Wheatstone bridge to measure displacement rather than velocity.

That serious amplification consigns phono stages to entirely separate units almost as a matter of course. The idea of purchasing a phono cartridge with an accompanying box of electronics no longer seems strange – perhaps the strain gauge cartridge's time has come at last.

In essence, a strain gauge uses semi-conductor elements that change their resistance when subjected to deflection by a force. By measuring this change in resistance, the cartridge 'measures' the motion of the stylus in the groove.

It does this by means of a special pre-amplifier that feeds an electrical current into the cartridge, then measuring what comes out. This explains the distinctive little blue lights that shine from the front of the cartridge.

Apart from needing that separate specialist preamp unit and its substantial outboard power supply, the Strain Gauge looks and behaves like most normal cartridges. It doesn't need any more than the four wires normally fitted to any tonearm, which is very convenient. However, it does have a couple of extra features that are not normally found on high-end cartridges.

The first extra is the presence of two stiff little screws that adjust cartridge azimuth and VTA. The second is a detachable stylus assembly, held in place by powerful magnets and useful for those interested in vintage 78s.

No fewer than six interchangeable stylus assemblies are available and all are relatively inexpensive by high-end cartridge standards. Even the most costly SGS-6, with ruby cantilever and nude line-contact stylus, costs less than £500.

However, the cheapest complete Strain Gauge package, including the cartridge, the essential pre-amplifier unit and its outboard power supply, starts at a much more substantial £6,100, while the full feature top model doubles that to £12,200.

All the preamplifiers have the same rather nostalgic casework, with hardwood trim, routed grooves and bright multi-coloured lighting. Even the basic SG-400 version reviewed here has an additional stereo analogue input, a by-passable volume control and comprehensive defeatable muting features.

Although it's possible to connect the Strain Gauge as a preamp, connected directly to a power amplifier, using its own volume control and feeding other sources via its analogue inputs, the sound in our system was preferred when it was simply used as a fixed output single-ended line level source, feeding Naim NAC552/NAP500 amplification. Balanced outputs are also available.

The SG-400 arrived fitted with the SGS-6 'optimised contour' stylus assembly. Whatever stylus used, the Strain Gauge cartridge seems to have a very low moving mass and very little internal damping. These are both probably good things, as damping seems to introduce subjective time-smear.

Aided by the sensibly square shape, fitting and aligning the cartridge in our Rega RB1000 tonearm was easily, quickly and successfully accomplished, helped by very detailed instructions. Incidentally, the RB1000 is mounted on a hybrid Linn/Rega turntable.

Measurements at 1.8g downforce gave very positive results, showing an essentially smooth and flat response, only disturbed by a slight rise at high frequencies above 10kHz, with a modest peak of about +2dB at 15khz. channel balance was close; stereo separation was wide; and the LF resonance in a 14g effective mass tonearm occurred around 12Hz.

We could describe the sound of this cartridge with a number of different adjectives – and nearly all of them highly complimentary. in a very real sense, it seems to combine the best qualities of both vinyl and CD, with the sweetness and detail of the former, alongside the smooth, clean clarity of the latter.

Alongside an impressive freedom from time-smear, smoothness and overall neutrality are two of the Strain Gauge's more striking characteristics. In this respect, it makes most conventional cartridges sound relatively coloured and untidy. Surface noise on ageing, well-played discs is still audible, but rarely intrusive and doesn't seem to get in the way of the music.

Maybe it's just a little too smooth and dynamic expression a little constrained, but background noise is very low indeed, so the actual dynamic range is wide. Since installing the Strain Gauge, we've also found it much easier to comprehend previously obscure lyrics, especially from artists like Tom Waits and Bob Dylan.

Stereo imaging is first class, with superior stability, fine focus and precise positioning. Central image focus is particularly impressive and the stereo soundstage has fine depth perspectives. We encountered no tracking problems whatsoever in months of use, at a 1.8g downforce.

It should be pointed out, however, that the Strain Gauge takes no prisoners. Although many recordings sound wonderful, poor recording practices such as excessive compression are not disguised and their inadequacies are ruthlessly revealed.

It's also a shame that this cartridge is quite so expensive, but we'd argue that you can have few regrets about purchasing something that completely changes one's vinyl and hi-fi listening experience for the better.