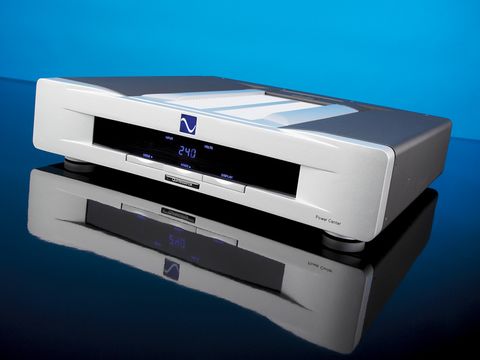 Although it works well with cheaper kit, this would still struggle to be a cost-effective upgrade in that context. Its real home is with high-end systems, where its subtle improvements remain worthwhile.

PS Audio has a long history with mains filtering and conditioning, and was one of the world’s first companies to market a complete mains regenerator (which it sells for £1,700). The Quintessence, tested here, is the company’s top-of-the-range filtration product. A substantial unit – similar in size and weight to some of the chunkier amplifiers – it features five mains outlets, plus phone and TV aerial input and output sockets. These are fitted with voltage surge protection, principally aimed at reducing possible lightning damage.

Surprisingly, the Quintessence has a front- panel display. It shows the current mains voltage and distortion: not that the unit can do anything much about either, but it’s interesting to find these things out. In fact, PS Audio is proud that the Quintessence does the least possible to the mains voltage thanks to its low internal losses at 50Hz. It uses ‘Nano Crystalline’ materials for high-value inductors.

According to PSA this leads to unprecedented amounts of filtering – as low as 7kHz without any unwanted intrusion into the mains voltage and impedance at frequencies up to a few hundred Hz. As we were able to observe, it does minutely reduce distortion by reducing the level of some very high mains harmonics. Each output socket is isolated from the others in a similar manner to that of the Isotek Sigmas – its nearest direct competitor.

In a nice touch, PSA has added the option of ‘always on’, ‘switched’ or ‘delayed switched’ operation to the sockets, in three groups (2+2+1). In this way, the front-panel switch or the remote control can activate an entire audio or home cinema system in sequence. Construction is beyond reproach, the rugged case being held together by numerous screws.

The effect of mains products is often more pronounced with upmarket equipment. With big budgets, manufacturers can come up with hi-fi components that are less prone to mains disturbance. And the refined sound of systems like the Quintessence makes it relatively easy to hear subtle improvements.

Typically, its areas of excellence are in the ‘darkness’ of the background and the precision of high treble. However, the two can easily make delicate treble details sound imprecise. With some (but not all) source components we also found a small improvement in bass tightness. This was most noticeable when we used the Quintessence with an open-reel tape deck.

The cheaper systems also had slightly better imaging depth than before: the high-end kit was much better at that in the first place!

It’s a little frustrating that no one filter we’ve tried, at this price, does everything. This has a quantitatively similar effect to the Isotek and other models we’ve tried, but is qualitatively rather different. Maybe the even dearer models fit it all in, but this is a highly capable product which we are happy to recommend.