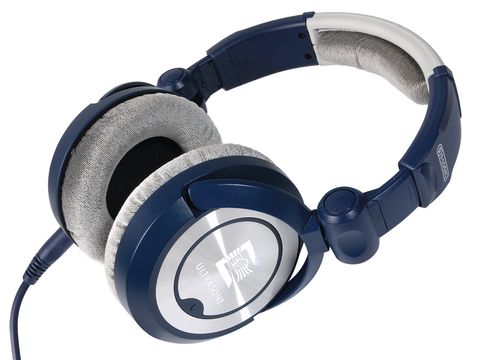 Overall, a slightly unsatisfying headphone despite a warm and rhythmic bass and fair detail. Closed-back construction gives above-average exclusion of external noise, however

Like all the other Ultrasone models, the Pro750 employs two unusual features: 'Ultra-low emission' and 'S-Logic Natural Surround'.

The former refers to mu-metal screening, which reduces the stray magnetic field reaching the listener's head - there's no specific suggestion that this is a problem, but in principle the idea of reducing exposure to all sorts of electric and magnetic fields seems a good one.

S-Logic claims to recreate a natural spaciousness missing from most headphones, something it does by the simple expedient of mounting the drive units in each earpiece slightly off-centre so that they fire sound more into the outer ear, rather than straight down the ear canal. This is also said to reduce the level at which one listens, though it's a little hard to imagine exactly how that works.

As a 'pro' model, the '750 has quite a few practical features that we like, such as the choice of straight or coiled lead (either of which attaches via a screw-fastened 3.5mm stereo jack socket in the left earpiece). It's also less bulky than most high-quality headphones.

The earpads are quite soft and seal well round the ears thanks to the fairly tight headband. The space for the ears is a little on the small side, but in a way that's not such a bad thing as it makes misalignment that much less likely.

Our first impression of this model was of a very direct and quite bassy sound, just the sort of thing one could imagine going down well in a pop recording studio.

From a domestic hi-fi point of view it's also quite appealing, the bass often seeming rather tame after many loudspeakers. The treble is less bright than some, but has some oddities to it which show up with the usual giveaway sounds – cymbals, brightly-recorded vocals and so on.

One area where this model certainly scores over the rivals is exclusion of external noise. It's still some way from what some in-ear 'phones can offer, but does mean for instance that one can have a pretty good listening session while a quiet conversation is happening in the same room.

Detail we felt to be only moderately good, by headphone standards. That's to say that it scores highly against most (affordable!) loudspeakers, but it doesn't quite have the insight of the best models here. Stereo imaging too is less good than some can offer.

As for the benefits of S-Logic, even with the benefit of listening out for it we were hard pushed to hear any real surround effect. Indeed, given the comment above about stereo imaging, it seems the aim has been missed by some distance, but it's hard to see how headphones could ever create more than the vaguest illusion of surround sound even if they were fed from more than two channels.

We also have to report that one driver failed during the lab tests (after the main bulk of listening, fortunately). As the drivers have voltage protection fitted, and we were driving them only moderately hard at the time, we're both puzzled and disappointed. Hopefully, our next experience will be more positive!