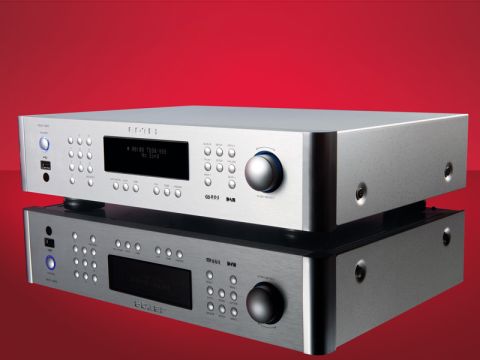 You'll never be bored with this unit; there's not much it could add in terms of features and sound is satisfying

Here's a genuinely tricky one: what do you call a bit of hi-fi that plays most of your digital sources? A hub? Maybe. Rotel calls its new RDG-1520 (Rotel Digital Gateway) a FM/DAB tuner with internet radio, but that's pure modesty.

For this convergence bit of tech is a tuner, streamer, iPod dock and DAC in one neat and very affordable (£795) box. It has been built in a similar vein to Marantz's NA7004 streamer, but also adds wireless ethernet.

Whatever you call it, the RDG-1520 is living proof of hi-fi convergence – sources coming together in a single place and in a reasonably user-friendly way.

Just exactly how user-friendly we'll come to in a minute, though it's worth mentioning at the outset that there is no one perfect solution, as people's expectations vary very widely. This unit has a simple text display and no video output.

So the RDG-1520 gives you the choice of radio stations and formats. It connects to your home network either wirelessly or via an Ethernet cable, accessing the internet through your router and it's a complete breeze to set up – all you need to know is which router is yours (unless your house is remote, a few neighbours' routers are likely to show up on the set up list too) and what its access key is.

And since it's connected to the network, it might as well be able to play music from the computer(s). This it will do if you have a suitable UPnP (Universal Plug 'n' Play) server. In most cases, this is simply a bit of software, quite possibly part of your computer's basic system though separate UPnP software is available.

The server needs to know where (in what folder) you keep you music, and the tracks are then searchable by the unit.

The good news at this point is that the Rotel has built-in support for uncompressed audio, right up to 96kHz sampling rate (though only 16 bit), in addition to all the usual lossy systems – MP3, AAC – WMA and lossless FLAC.

In principle, this should mean bit-perfect transmission, but we were unable to achieve that; most computers will resample by default and although the quality loss isn't huge (certainly nothing like lossy compression), it does typically introduce some artefacts and also limits effective sampling rate to 48kHz.

Add to all this a couple of handy wired inputs, one an A-type USB socket on the front for music players (including the iPod/iPhone family) and the other a regular S/PDIF digital input (both flavours, electrical and optical) at the rear, capable of handling sampling rates up to 192kHz, and you'll see why Rotel is proud of this baby. There's not much it won't handle.

Internally there's surprisingly little going on – or at least, there's little enough to see. That's a function of the high levels of integration, with FM and DAB reception being handled by a single small circuit board, for instance. A large mains transformer fronts a conventional linear power supply, while the DAC is from Wolfson and is followed by analogue stages using good-quality through-hole components, including very good op-amp chips. Rotel has clearly taken some trouble here.

Connections are much as one would expect, including separate DAB and FM antenna sockets. However, as these both connect to a single circuit internally, it is possible to set the tuner to use one or the other of these sockets for both DAB and FM. This works well enough if you have very good signal strength on at least one of the systems.

It's a little confusing to see what is patently a USB socket marked 'Ethernet' but this normally receives a wireless adaptor dongle. For wired Ethernet, a small separate adaptor is supplied.

As for the user interface, it's something of a matter of taste. We found it straightforward, though just occasionally it's not obvious which button one should press next. Operation is based on a simple menu structure, aided by the well-filled front panel (ditto remote) and the push/twist control.

Track names and so on show up just fine and we do particularly appreciate that file/stream type and bitrate are displayed. Incidentally, we're sure that on a couple of occasions we heard momentary dropouts from both wireless and wired (iPod) sources, which seems odd and we hope is not typical!

In a way, the obvious place to start on the sound is with the 'traditional' tuner functions. At least that means we can get them out of the way quickly, which is just as well really.

The FM performance is OK, but not great: there's reasonable clarity but everything seems a bit washed-out and grainy. By the standards of all-in-one DAB/FM tuner heads it's not bad, but if you want really class-leading FM you'll want an FM-only tuner, which will give better definition across the board.

As for DAB, it's fine – it sounds like DAB usually does – what else can we say? As good as any, but the format itself limits performance far more than the replay kit.

Internet radio is really the bright new dawn in more ways than one here. Ignoring the no-budget stations that put out something pathetic like 32kbps, results here can be very good indeed, certainly justifying taking a bit of trouble to decode and convert the bitstream as well as possible.

If you've explored internet radio on a computer, with typical attached computer speakers, you'll have little idea just how good some stations can sound. A product like the RDG-1520 is justifiable for any, but the most casual listening, giving as it does noticeably better resolution than lesser 'tuners'.

We found BBC Radio 3, for instance, to embody many of the best characteristics of FM and DAB without the drawbacks of either, while some German language classical music stations were nearly up to full CD-quality.

It also has a feature we haven't explicitly mentioned yet: internet radio. Rapidly approaching the 20,000-station mark, this is perhaps the biggest free music source yet. It also has some quite decent quality, thanks to high-data rates and better codecs than are used on DAB.

You can equally easily listen to mainstream stations from the UK and special-interest or mass-appeal stations from just about any country on the globe. The potential problem with such a wide choice is navigating it, and Rotel must be commended on neatly integrating this radio (and its other internet-enabled models) with the easy searching provided via a home computer.

Rotel's internet radio portal website allows you to register your RDG-1520 and store your choices against its serial number, thus creating a shortlist that's easily accessible via the unit. It's clever and effective, and we like it.

Listening to the stream

And, of course, music streaming from a local computer is full CD-quality if the tracks have been stored in such a format. In this case, the comparison between the RDG-1520 and a CD player is entirely fair and we tried it.

Indeed we tried a couple of decent players of recent vintage. We wouldn't say that the player completely walked it, but its sound held up well. It has good strong bass, with excellent extension and a satisfying degree of impact, allied to neutral midrange and treble that's just occasionally a touch dry but again well extended.

In terms of detail it's just a little behind the best, lacking a little precision and giving stereo images which are slightly compressed in both lateral and depth dimensions. It's a big advance on a lot of computer sound, just not quite the equal of good CD.

If we could find a bit-perfect UPnP server, performance in this area might be noticeably better.

Digital inputs, including USB (as always, for an uncompressed file), provide the ultimate test of the RDG-1520's internal hardware and the sound takes another step up. It's still not quite in competition with the best CD players and DACs, but there's a solidity to the sound which is most gratifying.

Even if there is still some work to be done to bring sound up to the level of the best 'traditional' hi-fi separates, units like this show that digital convergence need not be something for the audiophile to fear.