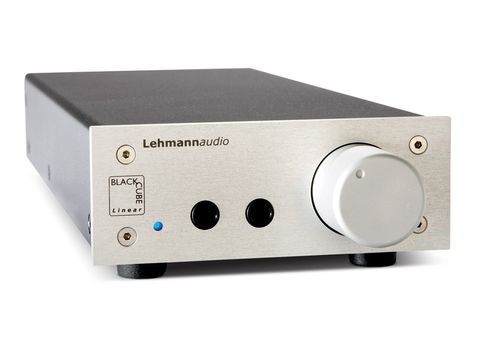 One of the finest headphone amps we've heard, capable of driving just about anything with supreme confidence

Admittedly, viewed as a preamp, it's a bit basic, because it features only one analogue input, and the DAC has only one input which is USB (when this is active, that is when it detects it is connected to a valid source, the analogue input is bypassed). So really this is an analogue/digital input headphone amp with a volume controlled line output!

Lehmann's idea of what constitutes a headphone amp is generous, with a full push-pull power amplifier output configuration. Of course, the power levels are lower than for an amp intended to drive speakers, but there are nevertheless four power transistors on heatsinks waiting to drive the load. And their ability to do that is impressive.

We obtained output powers of up to one-watt into low impedances and any kind of headphone, from 15ohms to 600ohms (which is pretty much the full range for dynamics), stand to receive at least 100mW.

We have to say that actually listening to any headphone when driven that hard is really not a good idea, but it's nice to know that at any sane level there's plenty of headroom.

You may already have noticed from the photograph that there are two headphone sockets on the front of the unit, of which one disconnects the line output and the other doesn't.

Next to them is the volume control, a traditional mechanical type from the Alps 'Blue Velvet' range. It's typical of the whole unit in being a high-quality component and the unit is powered from a generous internal toroidal mains transformer.

The phono sockets and USB input are a bit jammed-up at the rear and only labelled underneath the unit, but it's all easy enough to deal with.

Flexibility is enhanced by a couple of little slide switches underneath the unit, which give gain adjustment in 10dB steps.

Restricting ourselves to sensible listening levels, we tried this amp with various headphones from Grado, Shure and Beyerdynamic, and found it an excellent and fearless performer. It's slightly less at home with the lowest impedances (as typified by in-ear phones), with which it can develop a trace of tonal coloration, but across the range it is quite beautifully detailed and unconstricted.

It also does some very impressive things with bass; keeping it strong and precise but never accentuating it. Indeed, it's almost the perfect example of an iron fist in a velvet glove.

Treble is no less competent: sweet and open with minimal sibilance, though over-bright recordings are still going to sound that way, one of the undeniable drawbacks of headphones (plenty of recordings are just about acceptable on speakers, but simply sizzling on cans).

DAC to the test

All the above refers to the analogue input. We've mixed feelings about the digital input, though. It's good and indeed of its kind (using as it does a single, familiar, chip to receive and convert the digits) it's very good, but it's still not the equal of some of the very fine DACs that are around for £200-£300: we're thinking, of course, principally of the Cambridge DacMagic and the Arcam rDac.

Either of those could be had for about the price difference between the basic Black Cube Linear and the USB version and bothoffer higher quality and more fl exibility. In fact, either of those two could add a little resolution to this DAC and generally remove a veil or two between you and the music.

Of course, if simplicity is something you strive for and one USB input is all you need, it's much less of an issue and we can't deny that this is enjoyable via USB. Via line in, though, there's no question: it's a very fine headphone amp indeed.