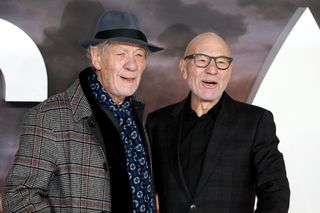 Sir Patrick Stewart met with Marvel CCO Kevin Feige "a couple of months ago" for some "long, long conversations", the actor has revealed. Speaking to Digital Spy, the actor makes it sound like the conversations were more than just a friendly catch-up.

"I met with Kevin Feige a couple of months ago and we had long, long conversations," Stewart says. "And there have been moves and suggestions, which include Charles Xavier."

Don't get too excited, though. Stewart says that 2017's Logan, one of the best superhero movies of all time, essentially shut the door on his portrayal of Professor X. "Here's the problem... If we had not made Logan, then yes, I would probably be ready to get into that wheelchair one more time and be Charles Xavier. But Logan changed all that."

The phrase "moves and suggestions" implies Feige had some kind of plan for Stewart's version of Professor X in the MCU, but it's tough to figure out what that would be without more detail.

We would guess that it's unlikely Stewart was being courted for a full-time return to his role in the MCU. In 2019, Feige told io9 that it'll be a "very long time" before the X-Men would join that universe. A cameo might've made more sense – perhaps in the upcoming Doctor Strange in the Multiverse of Madness, the name of which suggests the appearance of alternate realities, which could encapsulate Fox's X-Men universe.

When will the X-Men invade the MCU?

It would make more sense if Marvel was to completely recast the X-Men when it's time for the mutants to return to the big screen. Fox's first set of X-Men movies started back in 2000, and while most of its actors are still in fine shape, it's unlikely that Marvel would want to confuse newer audiences with the baggage of those older movies.

That said, there is now one actor in the MCU who has reprised his role from another fictional universe: JK Simmons, who played Jonah Jameson in the Sam Raimi Spider-Man movies, made a cameo in last year's Spider-Man: Far From Home.

If the gulf in quality and box office performance between 2014's X-Men: Days of Future Past and the Apocalypse and Dark Phoenix sequels showed us anything, it's that people have a real affinity for the original live-action versions of those characters.