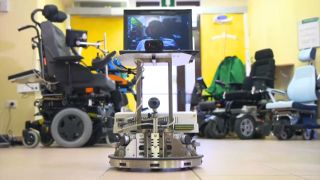 Telepresence robots are going to be a big part of our future. From virtual meetings to holographic pop stars and digital assistants, we're developing multiple ways to extend our presence to places we can't get to.

But outside of the obvious applications, the technology is also revolutionising the lives of people with severe motor disabilities. Now, a team of Italian and Swiss engineers has built an experimental telepresence robot that's controlled by brainwaves alone.

It consists of a laptop mounted on a base capable of free movement. That movement is controlled by a skullcap that reads brainwaves - the user can train it to recognise when they're imagining movements with their hands and feet and react accordingly.

The laptop's webcam lets the user see its surroundings, and the microphone and speakers let them communicate over Skype.

Similar robots have been built in the past, but the difference with this one is that it comes with some smarts of its own.

The robot's control software decides for itself how to interpret a 'forward' command, avoiding obstacles in the process. That makes it far easier to use than previous designs.

"Imagine an end-user lying in his bed at home connected to all the necessary equipment to support his life," Robert Leeb, who's working on the project, told Technology Review. "With such a telepresence robot, he could again participate in his family life."