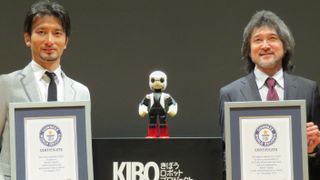 Just a quick story to make you feel better about your life achievements. A tiny android named Kirobo has just set two Guinness World Records: 'First companion robot in space' and 'Highest altitude for a robot to have a conversation'.

We don't want to sound like we're being pernickety here, but that second award feels a tad strained. Did that record even exist before a robot was put in space? And if so, who was on the phone to the Jim Pattison Group demanding their certificate?

This morning I put my pants on correctly first time AND made cereal without starting a fire, but I guess I'm just not an attention craver like some people are.

Anyway the stupid robot got two awards and looked smug about it. It'll be joining a list of esteemed Guinness World Record holders such as "World's funniest croissant" and "Ugliest bear" or whatever else is filling the pages these days.

Apparently it can also have conversations in Japanese and stabilise itself in zero-gravity conditions. Just a shame you'll never experience love or compassion, eh Kibs?