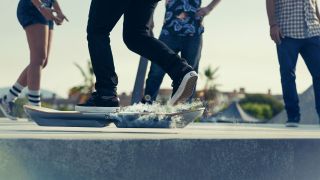 Lexus has finally showcased its hoverboard in action in a new video after teasing it for the past few months.

The video shows professional skateboarder Ross McGouran and a few others riding the hoverboard in a specially designed skate park - which, of course, gave us flashes of Back to the Future, especially when he rides over water.

But while this video is fun to watch, what might be more interesting to see the tech behind it.

Previously, Lexus had explained that the hoverboard uses liquid nitrogen smoke to keep the board's superconductors cold enough to create the levitation.

In a detailed video, the company revealed that it took the team 403 days from concept to final build to create to a workable hoverboard, which now weighs 11.5kg.

While it's still not a true hoverboard, in the sense that it really only works on the company's 'Hoverpark' (so no, you won't be able to just pick one up for your next trip to the skate park), the tech is still rather impressive.

The liquid nitrogen cools the superconductors to -197°C - it's operating temperature - which creates the smoke you see in the video.

When the board is cooled and placed on Lexus' Hoverpark, which contains permanent magnets, the parks "magnetic flux lines are 'pinned' into place," allowing the magnetic force to push and maintain the board's hovering height.

You can check out their 'making of' video below: