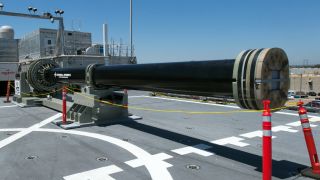 For several years, the US Navy has been working on a new kind of cannon called a 'railgun'. Powered not by explosives but by electromagnetic forces, it would represent a massive shift in artillery technology.

The railgun was invented in 1918 by French scientist Louis Octave Fauchon-Villeplee, based on previous work on a somewhat-similar coilgun. He showed that a projectile could be propelled by the magnetic field induced by a current passing along two rails.

The problem was the energy requirements. During WW2, Germany's Ordnance Office put together proposals for such a weapon, but after the war a US report into those designs found that firing it would require enough power to illuminate half of Chicago.

Slowly, though, as power generation technology has improved, a railgun has become more and more viable. In 2008, the US Navy tested an early prototype - sending a three-kilogram bullet through the air at seven times the speed of sound.

As long as you can meet the power requirements, there are two major benefits to a railgun over traditional artillery. The first is that you don't need to keep a load of explosives hanging around. The second is that the speed at which the projectile leaves the railgun means it can travel far further and faster than a conventional shell.

Development of the weapon, however, has been expensive - so far, it has cost more than $500 million. Plus, the Navy is discovering that the special projectiles it designed for the gun, which can be guided in flight, actually work pretty well when fired from conventional five-inch cannon.

That has lead some Pentagon officials to question whether the cost is worth it. "It turns out that powder guns firing the same hyper-velocity projectiles gets you almost as much as you would get out of the electromagnetic railgun, and it's something we could do much faster," Deputy Defense Secretary Bob Work said last month.

But Tom Boucher, the railgun's project manager at the Office of Naval Research, believes that the technology still has a bright future - once issues over power supply and the size of the device have been resolved.

"We are going to be OK. We are showing our progress, and the proof will be in what we do," he told AFP. "Powder guns have been matured to the point where you are going to get the most out of them. Railguns are just beginning."