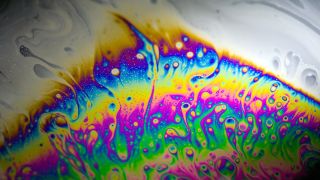 Since the dawn of electronics, we've been producing components in pretty much the same way. You get a chunk of silicon, 'draw' a component onto it, then get rid of all the bits that aren't part of that component. But nanoscientists are working on another method that's far cheaper and much less wasteful.

Molecular electronics involves building up components like transistors, resistors, solar cells and LED displays by getting molecules to self-organise into the correct structures. It's not an easy task, but a team at the University of Copenhagen has come up with a breakthrough. It involves soap.

The components used in self-assembling electronics are anti-fungal agents used in disinfectants, creams and cosmetics. They kill fungi by disrupting their cell membranes, and this same process can be used to create order in the chemical soup of molecular components.

Thomas Just Sørensen, who led the research, and his team tipped different soaps and washing powders into that chemical soup, and then poured the resulting mix out onto glass plates to find out if they became "organised". Sure enough, some did.

Unfortunately, the organised mixture isn't yet functional. But Sørensen believes that working parts aren't far away. "We were able to obtain a structure simply by mixing the right substances," he said.

"Even random substances were able to organise well, and layer, so that we now have complete control over where the molecules are, and in which direction they are oriented. The next step is to incorporate functionality within the layers."

Their discovery was reported in the journal ChemNanoMat.