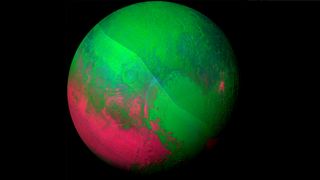 It's Christmas eve, and NASA is helping our galaxy get into the holiday spirit with a special "Christmas Pluto."

The image itself, which you can check out in full size here, was taken from about 67,000 miles away on July 14, which was when New Horizons was closest in its flyby of Pluto.

The video that found water ice

The video, which you can check out below, was recorded by New Horizons' LEISA infrared imaging spectrometer and has been sped up by approximately 17 times.

While it looks like something out of a 1960s sci-fi film, it was the data shown in this video that led to the discovery of water ice on Pluto.