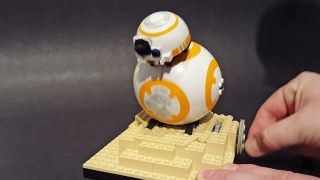 The Lego BB-8 droid in action.

Say the words "Star Wars", "droids" and "LEGO" in the same sentence and you have our attention almost immediately: which is why we're keen to see this amateur brick-building project become an official toy.

A working BB-8 droid has been built entirely from existing LEGO parts by a couple of keen fans and it's now being showcased on the LEGO Ideas portal. If it attracts 10,000 supporters (it's up to 2,103 at the time of writing) then it gets passed on to LEGO for consideration as a new set.

There's no motor inside as of yet but you can see BB-8 go through its moves on top of a customised "desert base station" that would be part of the set. LEGO weights, magnets and attachable arms are all included in the creation.

We've already seen Sphero release an official BB-8 toy, and Spin Master has plans for a larger version, but this is the first droid replica you can actually build yourself. If you want to make it a mass-produced reality, you'd better get voting.