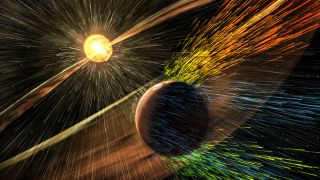 On Earth, solar wind causes the awesome aurora around the north and south poles, dancing green lights that make perfect 4K time-lapse fodder. However, NASA has discovered that it's the solar wind that's responsible for turning Mars from a warm, wet, life-supporting planet into the cold, dry, desert planet it is today.

That's according to data from the Mars Atmosphere and Volatile Evolution (MAVEN) spacecraft, which since September 2014 has been conducting the most detailed examination so far of the Martian upper atmosphere.

"There are 100g of atmosphere escaping every second from Mars," says MAVEN co-investigator Dave Brain at the University of Colorado. "I can't help but imagine a hamburger flying out every second, but actually it's carbon dioxide."

The solar wind is a stream of protons and electrons flowing from the sun at one million miles an hour.

During dramatic solar storms that hit Mars' atmosphere last Christmas and in March 2015, MAVEN was able to record an acceleration in loss of atmosphere to space. "Like the theft of a few coins from a cash register every day, the loss becomes significant over time," says Bruce Jakosky, MAVEN principal investigator at the University of Colorado, Boulder.

"We've seen that the atmospheric erosion increases significantly during solar storms, so we think the loss rate was much higher billions of years ago when the Sun was young and more active." When a solar storm hits Mars, escape rates go up by a factor of 10-20 times.

"Earth has a strong magnetic shield, but Mars doesn't," says Jasper Halekas, MAVEN Solar Wind Ion Analyzer instrument lead, from the University of Iowa. "Its upper atmosphere lies completely exposed, so the solar wind strips large portions away into space." The solar wind hits the planet full-on, much like the shockwave in front of a supersonic plane.

Does Mars have aurora?

Although Mars lacks an effective magnetic field like Earth's, the planet does have a bunch of smaller magnetic fields. Cue fabulous aurora on Mars that NASA has detected before, although MAVEN found something hitherto unnoticed – and very strange.

"A new kind of aurora observed by MAVEN was aurora above a region without any kind of magnetic field at all, which was strange to us," says Brain. "We saw it in the form of ultra-violet light detected by MAVEN's instruments," he says, adding that if you stood on the night side of Mars then it might be visible to the naked eye. "You might see the whole night sky light up – it would be magnificent!"

What is Maven doing?

MAVEN has been in a highly elliptical orbit of Mars since September 2014, reaching as close as 93 miles above the Red Planet to a distant 3,900 miles. Never before has a spacecraft been so devoted to exploring and understanding the Martian upper atmosphere.

An eight-foot cube, MAVEN has wings that extend 37 feet and are completely covered in solar panels, but it's the three instrument packages inside MAVEN that are crucial. The Particles and Fields Package measures the solar wind and ionosphere of Mars, while a Remote Sensing Package looks at the global characteristics of the upper atmosphere and ionosphere.

The findings follow an announcement in September that geologists had discovered long, dark streaks on Mars, evidence that saltwater still flows on Mars.

With the news that NASA has measured the effect of the solar wind, scientists are beginning to piece together exactly what happened to Mars' atmosphere, and whether it could once have sustained free-flowing water, and possibly life.

As well as being 95% carbon dioxide, the atmosphere of Mars is about 100 times thinner than Earth's. Was it once dense enough for water to flow on the surface?

Scientists know Mars is cold – NASA's Spirit Rover recorded temperatures as low as -130ºF/-90ºC in winter and established an average of -67ºF/-55ºC – but until recently evidence of water had been sporadic. NASA's Phoenix Lander of 2008 detected ice caps and snow in the high arctic region of the planet, but it was mostly frozen carbon dioxide.

However, not only has Curiosity found dried-up rivers and pebbles that suggest flowing water, but it's found that water molecules make up a huge 2% of soil samples in its home, Gale Crater. It's not chemically pure, but when the soil is heated up to 835º water vapour is released. It's good news for future astronauts on Mars.

Will this affect NASA's 'man on Mars' mission?

"The escape rate today is not a large number," says Jakosky about the leeching of Mars' atmosphere. "It's enough to remove the atmosphere in a couple of billion years."

That's plenty of time for NASA, which recently committed to a trip to the Red Planet in its Journey To Mars program. The space agency wants to put man on Mars in the 2030s, but not before more deep space experience; first by capturing an asteroid in the 2020s, and secondly by letting astronauts explore it while well beyond low-Earth orbit.

A Mars mission also depends on successfully testing NASA's new Orion capsule and Space Launch System rockets, as well as on the development of Solar Electric Propulsion to send cargo to Mars in advance. "Mars exploration will be this generation's legacy, and the Mars 2020 rover will be another critical step on humans' journey to the red planet," says NASA Administrator Charles Bolden.

Next year will see the launch of the European Space Agency's ExoMars Trace Gas Orbiter, which will search for signs of methane, confirmation of which would add to MAVEN's findings about how the solar wind has decimated Mars' atmosphere. "To quote Bob Dylan," says Michael Meyer, lead scientist for the Mars Exploration Program at NASA, "the answer, my friend, is blowing in the wind."