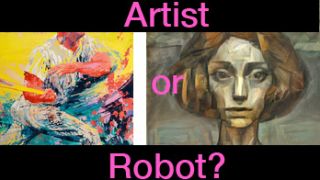 Turns out telling the difference between art created by a human or a robot is harder than you'd think.

Researchers have developed a Turing test of sorts by placing one piece of art by a robot, and one by a human next to each other and giving us the tricky task of guessing who did which.

A quick office poll showed that robots are more accomplished in their art than we'd think or hope as no-one managed to score more than 7/10.

We're not sure what this means but we think it has something to do with the robot apocalypse.

You can test your own robot-detection abilities here.