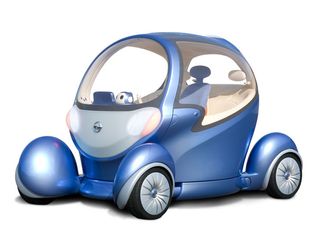 Although it looks like a movie prop, the Pivo 2 is a fully functioning electric car.

The Tokyo Motor Show, which begins this week, is always a forum for the major Japanese carmakers to show off their most outlandish concept models in the hope of winning a few extra column inches in the world's press. Nissan, in particular, has an excellent pedigree in turning heads.

Drawing most face time this year is likely to be the company's Pivo 2 electric car, mainly on the strength of its crab-like parking ability, but also because it features an R2-D2-like talking robot embedded in the dashboard that can take control and manoeuvre the car.

Use the force PaPeRo

The robot in question is a bodyless version of PaPeRo created by NEC to act as both navigator and driver counsellor. If that sounds weird, it's because it is - aside from help with route planning, PaPeRo also analyses stress levels in the driver's voice and calms him or her with a relaxing chat if necessary. We know - this is Japanese, after all.

On the car side of things, the Pivo 2 uses its lithium-ion-powered engine to move forwards, backwards and sideways on wheels that can rotate through right angles. The most show-stopping trick, which you can see on video here, is the capacity to auto-park by rotating the wheels and creeping sideways into a space barely larger than the vehicle.

Throw in the ability to scuttle backwards without engaging reverse gear (there isn't one) and Nissan has a fun little vehicle that is sure to be as popular as its predecessor of two years ago.