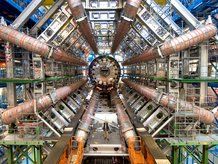 The Doomsday clock is still ticking

It's D-Day for the Large Hadron Collider Experiment – with the world watching as the first test of the controversial experimental device gets underway today.

Scientists are hoping that by crashing two particles into each other at near light speed around the 27 km ring at CERN in Switzerland they will be able to study the likes of the so-called God Particle or Higgs Boson.

Some suggested that the process could create minute black holes here on Earth with cataclysmic results. They were described as 'twats' by former D:Ream member Professor Brian Cox.

End of the world parties

The first attempt to smash particles together has not yet occured. Thus far, the scientists have warmed up the machine by passing a proton beam through the collider's 27km long tunnel. The actual experiments aren't expected to start for another six weeks.

Although the supposed danger of the world ending has been rubbished by every sane person on the planet, it hasn't stopped some cautious people organising 'end of the world' parties.

According to the Australia's News.com website, Lachlan Hibbert-Wells is one person who is hosting a 'doomsday' party, something he has publicised on Facebook.