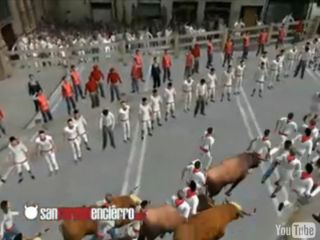 Do you secretly harbour the desire to run with the bulls through the Spanish streets of Pamplona, but without the risk of being gored?

New software developed by Proevent means that now you can.

Using a headset and specially designed treadmill, would-be competitors are transported into a throng of computer-generated runners tackling the famous 1 mile bull-run.

Complete with screaming spectators in surround sound, 'runners' get all the thrill of the chase - minus the possibility of being skewered.

Get some brain control

In other strange news, thought control came a step closer this week. A new technology was announced that lets you use your brain as a robot remote control

If that sounds a bit weird, it's because it is. The result of a partnership between Japan's Honda Research institute, ART and Shimadzu Corp, the Brain Machine Interface uses electroencephalography (which measures electrical currents) and near-infrared spectroscopy (to do with blood flow in the brain), to analyse your thought process.

The tech apparently gives you 90 per cent accuracy over your robot slave. Sadly, you don't look too cool while you're doing it; the only way to administer control is via an oversized chair sporting an absurd-looking cap.

One machine that can't be controlled, apparently, is Acer's Aspire One netbook, which reportedly has a bizarre aversion to U2. According to several users, playing Hold Me, Thrill Me, Kiss Me, Kill Me too loudly results in "catastrophic failure". We'll second that…

Did you order a…?

And the discovery of an unauthorised Domino's promotion has led to the fast-food chain accidentally giving away nearly 11,000 free pizzas. The information spread like wildfire on Monday, when customers realised that typing "bailout" while ordering online resulted in a free medium pizza.

According to a spokesman for the company, Domino's had discussed running the promotion back in December – but never actually authorised it. Some 11,000 pizza lovers used the code before the company deactivated it on Tuesday morning.

And what about this unusual Tinge razor-and-personal-massager combo? Don't be fooled: while on first sight it may look like a regular, every-day razor, press a few buttons and you'll suddenly find yourself holding a 32-mode body massager instead. What could possibly go wrong?

If you insist on driving your motorised bar stool to the pub, at least try not to get so intoxicated you crash it on the way home. That's what happened to one Ohio man, who has subsequently been slapped with a charge of OVI (Operating a Vehicle While Intoxicated).

While we're at it, if you're going to chuck a few petrol bombs around inside a vacated building, posting a video of 20-feet flames on YouTube - complete with rolling credits naming those involved - probably isn't wise either.