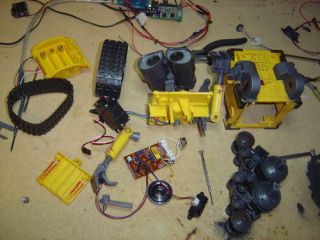 Fed up with a Wall-E robot that did nothing, a hacker decided to get inside the little guy's chassis and soup him up a bit.

Using a few LEDs and infrared sensors, servos to move the arms, head and tracks and a microcontroller, Wall-E was brought to (autonomous) life.

A few thousand lines of code later and he was ready to explore his own world, where he could move his body and guide himself around an area using a 2D map.

Albeit fairly slowly; we suspect the real Wall-E could take him in a race.

Although the ability to sense his surroundings was cool, we couldn't help but feel if this hacker had bought a remote control Wall-E, one that can move already, he could have saved himself a lot of trouble...

However, check out the YouTube video of the build if only for the brilliant moment when he appears to flip off a model of Doctor Who's dog, K-9.