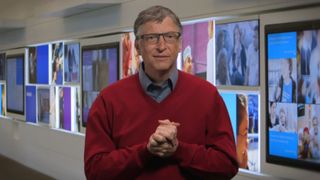 Bill Gates has insisted that Apple should help out the FBI by accessing and sharing information on the iPhone used by one of the shooters in last year's San Bernardino terrorist attack, with the Microsoft man believing this is a "particular case".

Apple has argued that, even in a single case, it would amount to letting the genie out of the bottle if it creates software to allow the government access to the phone, and the tech community has been overwhelmingly supportive.

But Gates – who spends more time on his charitable foundation than Microsoft these days – has taken a different view, telling the FT: "This is a specific case where the government is asking for access to information.

"They are not asking for some general thing, they are asking for a particular case.

"It is no different than [the question of] should anybody ever have been able to tell the phone company to get information, should anybody be able to get at bank records. Let's say the bank had tied a ribbon round the disk drive and said 'don't make me cut this ribbon because you'll make me cut it many times'," he added.

Gates is insistent that a process should be in existence to moderate government access however, adding: "I hope that we have that debate so that the safeguards are built and so people do not opt — and this will be country by country — [to say] it is better that the government does not have access to any information".