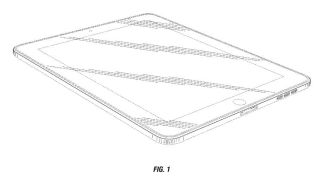 Start the slow clap for Apple: it finally has its patent for a rectangle with rounded edges.

By all appearances, the patent essentially covers a "Portable display device" that's a rounded rectangle, ostensibly covering Apple's claims to innovating such a design.

Although Apple is probably very pleased with finally getting a government body to back its claim, whether the patent is worth the paper it's printed on is another question.

Apple has a number of enemies, though the one with hackles up highest is a certain South Korean juggernaut.

When the legal tussle between Apple and Samsung started heating up earlier this year, Apple successfully argued that the Galaxy Tab 10.1 should be banned in the U.S. as it infringed on Apple's D504,889 design patent.

That patent looks to cover an early iPad prototype, and U.S. District judge Lucy Koh, who presided over a four-week trial between the two, imposed a sales injunction on the Tab 10.1 based on probable '889 infringement.

Then, in August, a jury ruled that the Tab 10.1 didn't infringe on that particular patent, though its members did find Samsung smartphones and tablets infringed on others.

At the time, Samsung remarked that it was "unfortunate that patent law can be manipulated to give one company a monopoly over rectangles with rounded corners."

The Tab 10.1 ban was lifted post-trial, while meanwhile Apple worked to secure the '286 patent.

The '286 patent as filed shows a number of parts, such as speakers, belonging to the original iPad.

However, Apple noted that the only image within the patent Apple claims '286 covers is the sketch of a flat, front-facing, rounded-rectangular device.

The sticking point for Apple is that the new patent seems to be the patent that folks wrongly asserted the '889 to be, one that failed to ban another device.

"This design patent gives Apple no new advantage because no one is out there trying to market an iPad lookalike," Lea Shaver, an associate professor at Indiana University's McKinney School of Law, reportedly told Wired.

While '286 includes numerous examples of prior art, such as early HP tablet PCs and a Knight Ridder tablet concept, including many that Samsung cited as prior art references to the '889 patent, it still qualified for a USPTO design patent.

What can be said is now that Apple has apparently patented the concept of a rectangle with rounded edges, it's going to flaunt it.