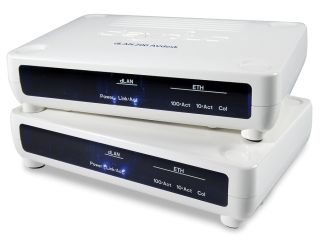 Considering the delays in getting the next-gen 802.11n Wi-Fi specification nailed down, you wouldn't hold out much hope for the IEEE developing a standard for BPL, a.k.a. broadband over powerlines. At least, not any time soon.

Nevertheless, that's what the group is working on next. The IEEE has announced that it has identified over 400 requirements for BPL and created the IEEE P1901 working group to develop a robust specification.

Calling it the "Standard for Broadband over Power Line Networks: Medium Access Control and Physical Layer Specifications", P1901 group will basically specify how high speed data (in excess of 100Mbit/s at the physical layer) should be sent over AC powerlines between substations and homes (the last-mile solution), and within the home itself (the LAN solution).

Proposals for technical solutions are due by June 4th and the IEEE expects to have a global draft standard agreed by 2008. (However, the history of 802.11n development suggests that we add a couple of years on top of this date to take into account feedback sessions, redesigns, disagreements, more feedback sessions and never-ending technical wrangling.)

"The goal is to create the best technical standard, whether from one or many sources," says Jean-Philippe Faure, chair of the IEEE P1901 Working Group. "The technologies chosen will form the baseline for the standard, which will allow the full standard to be written and companies to begin creating and testing prototypes of BPL hardware."

BPL networking is already becoming a feature in homes thanks to the availability of 'Powerline' devices from Devolo and Netgear . But even at this LAN level, the original HomePlug standard is being challenged by a rival technology from DS2 . The two systems are incompatible and, as the popularity of BPL grows, this can only lead to consumer confusion.

Thankfully, the P1901 working group includes both HomePlug and DS2 representatives, not to mention big hitters such as Intellon, Intel, Broadcom and Panasonic.

On a larger scale, the benefits of offering BPL as a 'last-mile' solution (no new infrastructure required...) will place it in direct competition with existing cable and ADSL services. In addition to land-based systems, the IEEE P1901 working group also plans to discuss the potential of BPL networks for planes, ships, and trains.