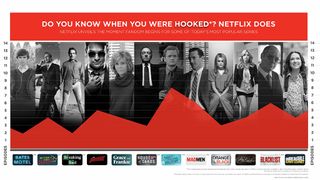 While traditional broadcast television has spent decades trying to hook viewers to a show from its pilot episode, new data revealed by Netflix suggests that people need a few episodes to be truly hooked – not only that, Netflix has used the data to pinpoint the exact episode in a season that creates new fans.

According to Netflix, 70% of viewers who watched the episodes in question would then go on to finish the entire first season of the show.

Ted Sarandos, Chief Content Officer for Netflix, admits that "a series pilot is arguably the most important point in the life of the show," though Netflix's research suggests that fandom is not achieved until several episodes in.

"In our research of more than 20 shows across 16 markets, we found that no one was ever hooked on the pilot," said Sarandos, also stating that the company is confident that giving its members "all episodes at once is more aligned with how fans are made."

When it comes to the number of episodes it takes for each show to send people into a binge-watching frenzy, the figures may surprise you – according to the data, Bates Motel hooked people in only two episodes, while Marvel's Daredevil, which had a built-in fanbase that was eagerly anticipating the show's arrival, took five episodes to ensnare its audience.

The image below gives some further information on the specific episodes that caused people to become addicted to a selection of Netflix's most popular shows – spoiler alert: Richie Rich is not on there.